European trade unions are facing new policy dilemmas regarding the growing proportion of immigrants and ethnic minorities in their membership. However, the character of union activities on racism and discrimination varies tremendously between different European countries. This report contrasts trade union activities in Denmark and the UK, in the context of the “consensus” and “conflict” dimensions that have characterised their approaches to industrial relations respectively, and the very different national discourses on multiculturalism. Interviews with trade union officials and activists within each country reveal marked differences in union approaches to tackling racism and discrimination. Since the 1970s, British trade unions have developed increasingly stronger anti-racist and anti-discrimination policies, whilst at the same time seeing their membership decline severely. In contrast, the Danish unions have increased their membership and remained highly influential, whilst remaining comparatively inactive with regard to anti-discrimination. The paradox is that the weakest labour movement has developed the strongest anti-discrimination activities. The author raises the question as to whether the Nordic social model of consensus and cooperation may have some intrinsic weaknesses when it comes to anti-discrimination and anti-racist activities. 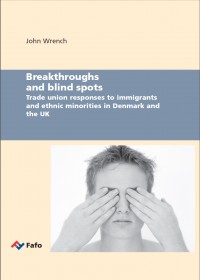