This report examines the scope and characteristics of permanently low-paid workers in Norway. We find that of those 23 per cent in the age group 24–66 years who were low-paid in 2019, one-third were permanently low-paid. This corresponds to just under 180 000 persons. Our definition of a low-paid worker is a person who has earned hourly wages at or below the low-wage limit for at least three of the last five years, including in combination with periods with no wage income.

We have further investigated the extent to which the permanently low-paid were affected more severely than other groups when the pandemic crisis hit Norway in 2020. We find that in common with persons with a weak affiliation to the labour market, the permanently low-paid have a greater likelihood of losing their earnings than other employees. The results illustrate that lack of wage-mobility is often associated with greater vulnerability in crises. 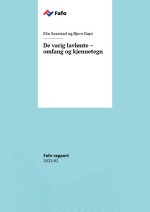