This report presents the tabulations from the Haiti Youth Survey, a follow up to the 2001 Haiti Living Condition Survey with a special focus on youth. One-third of the Haitian population is between 10 and 24 years of age and the opportunities made available to them will greatly influence whether Haiti will stabilize and prosper, or relapse into conflict. The chapters in the report document the situation for Haitian youth in key sectors such as education, labour force participation, migration and feeling of security. The report also contains data at the household level on central topics affecting the conditions for youth in the household, such as composition of households, household economy and access to infrastructure. A set of indicators used to assess selected Millennium Development Goals is also included in the report. 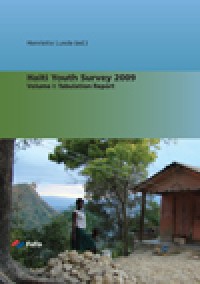