The Scandinavian countries have a long tradition of setting wage floors through autonomous collective agreements. With high levels of collective bargaining coverage, the collectively agreed wages have acted as an effective substitute for statutory minimum wages (Chapter 1; see, also, Grimshaw and Bosch, 2013). Moreover, despite decentralization of certain features of bargaining in the 1980s and 1990s, the wage settlements remain highly coordinated and have delivered compressed wage structures with relatively high negotiated (industry level) minimum wages and a comparatively small incidence of low-wage employment (Garnero et al., 2015; Svarstad and Oldervoll, 2018). Overall, the combination of high bargaining coverage and the normative effect of collectively agreed wages provided a high level of institutional stability from the formative phase at the beginning of the 20th century up to EU enlargement in 2004. Since then, however, the rather unique institutional system of low wage regulation has faced growing challenges and has had to adapt to ensure continued effectiveness. 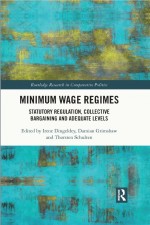