A new way to full-time culture

Full-time employment as a norm in the Norwegian municipal sector has been a goal for the central government, workers’ and employers’ organizations, as well as numerous municipalities over the last two decades. The municipalities of Fredrikstad, Drammen and Aremark along with Østensjø District in Oslo have established a network called “A new way to full-time culture”. The main goal of the network is to develop a culture of full-time employment in the participating municipalities and district as well as in the rest of the country in the long term. In parallel with the establishment of this network, four municipalities (Flekkefjord, Hægebostad, Sirdal and Kvinesdal) in the Lister region in southern Norway have carried out a related research project together with Fafo. As part of this research project and the creation of the full-time culture network, Fafo has conducted surveys in all eight areas as well as a nationwide survey among members of Fagforbundet. This report presents and discusses findings from these surveys. The findings indicate that part-time work has an impact on factors such as the working environment, quality of service and operational efficiency. 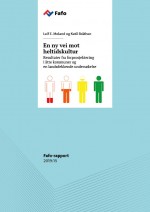