Economic incentives and the integration of immigrants

The task that we have attempted to solve in this report is: How can we design pilot projects for use of economic incentives intended to improve the results of the introduction programme and Norwegian language training for recently arrived immigrants? A key premise has been that the proposed models should lend themselves to results-based evaluation, i.e. that we should be able to determine with a high degree of statistical certainty whether the models function or not. The commissioning agency’s requirements have also included design of at least one intervention that targets individuals and one that targets the organisational level, i.e. local councils, county administrations, employers or the voluntary sector. Our working methods have consisted of reviews of existing literature and collection of information from relevant professionals, but mostly in discussing various proposals for models. The discussions have been based on an analytical framework that involved a number of different requirements for the models. They should be designed in such a way as to substantiate that those who are incentivised will also be able to respond to the incentives, they must be understandable and practically feasible as well as ethically sound, and they should produce a societal gain. This way of working has meant that a lot of time was devoted to discounting input that failed to comply with all requirements. We provide some examples of proposals that have been discussed and rejected, with a brief explanation of why these particular ideas were rejected.

This exercise left us with two main models:

1: A model that targets those who are entitled as well as obligated to participate in Norwegian language training and gives a bonus to those who pass the Norwegian language test at a suitable level (given their individual background) within a specified time. We propose a design which is considerably more detailed in terms of language skills levels than previous models that have been tested in Sweden. Our main motivation for this choice is to construct a differentiated model that provides a real opportunity for as many participants as possible to obtain the bonus, including those who have little schooling. A further alternative that we describe is to target the incentive at the municipal level instead, and reward municipalities whose participants achieve good results. However, these two models cannot be tested in parallel.

2: A model that targets municipalities (and indirectly also county administrations) and participants in the introduction programme simultaneously. The intention of the scheme is to provide local councils with economic incentives and latitude to cofinance in various ways the costs incurred by the county administrations in designing and implementing adapted education at the upper secondary level for adults (over 25 years), as well as in providing income security for relevant participants.

Both schemes address known challenges in integration of immigrants: slow progress in Norwegian language learning and deficiencies in available options and financing of subsistence related to provision of upper secondary education for adults with a minority language background. The relatively small number of counties and the small size of most municipalities have represented a challenge in the design of the proposals, as has the fact that the number of participants is limited and highly variable over time and space (municipalities). The small number of counties means that it is challenging to use the county level as the operative level when designing an evaluation – effects are difficult to identify. Because the municipalities are small, many of them have only a handful of participants, and this complicates the construction of solutions that should apply to a certain proportion of participants per municipality, for example. The proposals that we ended up with constitute what we believe represents the best possible compromise between the different requirements that must be set for the models in a constrained outcome evaluation design. Immediately before this report went to print, the Ministry of Education and Research launched its proposal for a new Integration Act. We wish to specify that in this report we have been unable to take into account or assess the proposals made in the new bill, although we comment on a couple of proposals that have been announced on previous occasions. 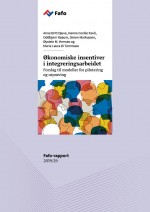