In this final, concluding report, Fafo and NIFU present an evaluation of pilot projects where alternative training models called vekslingsmodeller within vocational education and training were tested with support from the Norwegian Directorate for Education and Training. The term Vekslingsmodeller can be literally translated as ‘exchange models’. It characterises training models with more frequent changes of learning arena between school and workplace than within the main 2+2 model where two years of school-based learning are followed by two-year apprenticeships. It also entails that students enter into workplace learning and become apprentices at an earlier stage. The pilot projects have been implemented from 2013 to 2018 in a number of counties and within a number of vocational programmes.

The main goals of the evaluation have been to acquire knowledge about what characterises the training models, how they have been implemented, and the consequences for student motivation, learning and progression. The evaluation has been carried out in three phases: organisation and implementation, content and learning, and results and explanations. In undertaking the evaluation a number of data sources have been employed, such as qualitative interviews, analysis of activity reports from the projects, a company survey and analysis of the apprenticeship survey. However, qualitative case studies have constituted the core of the evaluation. Throughout the four-year evaluation we have followed six cases in depth to gain a greater understanding of why the projects progress as they do and have the consequences they have. As many projects have been within the programmes health care, childhood and youth development (and especially health care), and construction, we have followed two cases each in these two programmes: in Hordaland and Oppland in health care and in Oslo and Sogn og Fjordane in construction. In addition we have followed one case each in vehicle mechanics in Oslo and in service and transport in Østfold.

The evaluation shows that the alternative models have contributed to good motivation and learning for the participating students. The students themselves are very satisfied with the alternative models, and the schools are also generally positive when describing their views on the effects of the models on student learning and motivation. Many training companies and offices also take a positive approach to the models, especially within construction, but the views are more diverse within the companies, training agencies and municipal administrations (which act as apprenticeship employers in healthcare programmes) in terms of the desirability of such models within their vocational field. Student progression varies considerably between cases. While some cases have had almost no one leaving the alternative track, others have experienced considerable leakage into the regular track or out of education. The diversity of explanations as to why some decide to quit the alternative model make us wary of generalising, but there are indications that the alternative model with earlier apprenticeship and vocational specialisation does not necessarily suit all students, but is appropriate for students who have made a choice of vocation and have the maturity to enter an adult working environment. Data on progression are incomplete, but indicate that progression towards completed vocational education is equal to or better than in the 2+2 model.

Cooperation between the school and working life side has been closer following the implementation of alternative models, which must be considered a clear positive effect of the pilot projects. Veksling as an alternative model is nevertheless a resource-intensive model, both in established vocational fields, and particularly within the trades and occupations that struggle to engage employers and establish their position as apprenticeship-based training within the vocational education and training (VET) system. Veksling is usually organised in addition to the regular model, not as a replacement for it. Organising two parallel models requires more planning, both within schools and between the schools and the companies. Furthermore, we find that the pilot projects are heavily influenced by the historical training patterns within the various vocational fields. The model has represented a common solution to a variety of markedly different problems in different fields within VET, and in various parts of the country.

For the construction field, the main principles of veksling fit very well with the historical training models of these VET fields. The model is seen as producing better-skilled workers. The initiative has come partly from the industry itself, but the schools have also been active in driving projects, and in the case of Sogn og Fjordane they have been the primary driving force. Students, schools and companies all give positive accounts of the learning outcomes and motivation of students who have followed the model. From the company survey, we see that the companies emphasise particularly that students should become apprentices during the second year. Some of the pilot projects within construction have not been continued; in the case of Oslo, this is primarily due to a low number of student applicants, which seems reasonable to attribute to specific conditions in Oslo , including a low number of applicants to VET in general.

Within service and transport, alternative veksling training models have been one of several measures used to strengthen a group of vocational programmes with weak apprenticeship traditions. The ambition has been to strengthen the programmes both in working life and within a student group where many lack clear ideas about what vocation they would like to work towards. The projects have been an opportunity on the part of schools to form a closer relationship with companies and build a vocational skilled trade tradition in the process. It has been a challenge to establish a second alternative training model in a field where apprenticeships itself is so weakly established. The two schools we have followed have had mostly positive experiences, but our impression is that the model has been very difficult to implement, not least because there are few apprenticeship companies to work with.

Most pilot projects have been implemented in the education programme for health care, childhood and youth development. In addition to the general background, the alternative training model here had a particular origin in Report to the Storting (white paper) 13 (2011–2012) where veksling as a training model was proposed as a means of increasing completion towards vocational competence and thereby the production of skilled workers within the field. Through the pilot projects, the schools have been the driving force, while the municipal administrations with their training sites have agreed to cooperate and contribute. Vocational teachers from the schools have assumed responsibility for providing guidance, also after students have become apprentices in the companies. This is different from the regular model, and also from the other pilot projects, and must be seen as a reflection of the long school-based tradition within this vocational field, where training has been organised differently than in traditional apprenticeship fields. The schools receptive to veksling as an alternative model, and so are also many of the training sites, while experiences among the municipal administrations are more mixed. The model is seen as resource-intensive, especially when offered in parallel to the ordinary 2+2 model, but the actors’ experiences have been sufficiently positive to maintain the alternative model, as long as there is sufficient political support from the municipalities to accept these types of apprentices.

Within the vehicle mechanic field, apprenticeships have traditionally held a strong position, but the companies have generally adjusted to the 2+2 model. There has not been the same level of discontent with late specialisation and late progress from school to apprenticeships here as there has been in construction and in handicrafts in general. The initiative to try veksling as an alternative model in Oslo came from the school side. The model was organised through the employer-led training agencies and training ring. The students and the school have generally been satisfied with the learning outcomes of the participants, but there are more mixed views among the companies/garages and training agencies. Apprentices following this model generated some extra work for the garages as they were in school for parts of the time, and therefore could not follow the same training programme within the company as other apprentices. From autumn 2017, the pilot project in Oslo was stopped, in the sense that no new students started apprenticeships according to the alternative model. The direct reason was that the training agencies did not wish to guarantee at an early stage that they would provide apprenticeship places for students following the alternative model, which led the school and county to cease participation in the project. Even though the alternative model has worked satisfactorily, and students and vocational teachers have been fairly positive, the model did not represent a solution to any particular problem for the companies and training agencies/ training ring. When some of these actors found the model to be resource-intensive and with gradually less employer influence, their interest in the alternative model was not strong enough for it to be maintained. 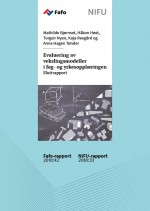