Taking as its starting point the evidence that non-citizen Palestinian refugees originating from Gaza — known as ‘ex-Gazans’ — are poorer than other Palestinian refugees in Jordan, this report examines the drivers of their living conditions. In so doing, the report first presents major features of the political-legal framework that applies to ex-Gazans in Jordan before turning to the socio-economic conditions of ex-Gazans living inside the country’s refugee camps. It presents comparative survey statistics on ex-Gazans in Jerash camp (the poorest of all refugee camps, which is home to almost exclusively ex-Gazans), ex-Gazans in the remaining 12 camps, and other Palestinian camp refugees holding Jordanian citizenship. A major finding is that income is generally lower in Jerash camp even compared to ex-Gazans in other camps due to the very different labour market faced by residents. Finally, the report therefore examines the local labour market access for ex-Gazans in Jerash more closely, drawing on interviews with more than 100 persons.

Overall, ex-Gazans are not treated entirely as foreigners under Jordanian law and have been accorded privileges with respect to civil documentation, health care, basic education, and access to the labour market. Nevertheless, their non-citizen status does impact upon available work and livelihood opportunities, and, subsequently, also bears on their socio-economic standing.

Larger household size and child dependency ratios do not necessarily translate into poverty. However, ex-Gazans in Jerash camp have lower wage income and are in possession of fewer household assets than ex-Gazans elsewhere and other Palestinian refugees. Not surprisingly, they much more often receive transfers than the other two population groups. Yet, such assistance is far from enough to cover the income gap.

Ex-Gazans outside of Jerash tend to have similar standards of housing to the other Palestinian refugees they live alongside; however, in line with the higher poverty rates and large households in Jerash camp, housing conditions are also significantly worse. The average dwelling in Jerash is about the same size as dwellings in other camps, but due to the larger household size, crowding is much more of a problem. In many camps, residents have been able to enlarge and improve their dwellings. In contrast, in Jerash, little improvement on the original dwellings has taken place, and housing quality is generally poor.

The educational attainment of the Palestinian camp population, ex-Gazans included, has increased steadily for a long time, with younger cohorts outperforming older generations, and young women outperforming young men. Ex-Gazans in Jerash are more often enrolled in education than ex-Gazans in other camps, and — unexpectedly, given the poverty in Jerash camp and financial barriers to their enrolling in higher education — they outperform both ex-Gazans and other Palestinian refugees in terms of attaining post-secondary education.

Ex-Gaza men in Jerash have somewhat lower labour force participation than other male camp refugees, and the work they do is more often temporary and irregular. However, ex-Gazans residing elsewhere stand out with a higher labour force participation than other camp refugees, suggesting that they may work more to compensate for otherwise fewer opportunities. Unemployment in Jerash camp is higher than elsewhere but the much poorer socioeconomic conditions are primarily due to the type of employment Jerash residents engage in.

The labour market in Jerash governorate is characterized by a large public sector. This is a particular disadvantage for ex-Gazans residing in Jerash camp, as they — like other non-citizens — generally cannot access the fairly well-paid, steady government jobs with pension schemes and other benefits. Furthermore, this has a particularly negative impact upon women’s employment opportunities, as women tend to be disproportionately employed in the public sector in Jordan.

Ex-Gazans often face hurdles in the private sector, since professional syndicate regulations frequently restrict professional licencing to citizens. When it comes to non-professional private sector jobs, ex-Gazans in Jerash are again at a disadvantage since Jerash town and governorate do not house any major industrial areas, such as those located in Amman or Zarqa. For many, the costs and irregularity of public transport makes commuting for work in relatively low-paid industrial areas, and in large cities like Amman and Irbid, infeasible. Likewise, renting temporary accommodation elsewhere is often not economically worthwhile. Not surprisingly, therefore, the trend that ex-Gazans are more likely to work inside camps than other Palestinian camp refugees is particularly pronounced in Jerash. However, shops and businesses here primarily rely on and cater for a relatively small community with little disposable income and low purchasing power.

With limited opportunities in reaching industrial areas, and without government employment to compensate, ex-Gazans from Jerash camp over-rely on temporary, irregular, and seasonal jobs when they work outside the camp. A third of the entire Jerash camp labour force — more than twice that of other ex-Gazans and Palestinian camp refugees — rely on such jobs, above all unskilled agriculture and construction work.

Given the difficulties of making ends meet, ex-Gazans in Jerash camp frequently express a strong desire to leave the camp. However, moving elsewhere is considered extremely difficult: partly because of the low relative value of properties in Jerash, making funding the move elsewhere difficult, and partly because of the crucial role that neighbours, family and friends play in supporting one another in times of need. Moving to a location with a weaker social network is considered a significant risk by many.

Despite ongoing efforts by the Government of Jordan to improve the living conditions of ex-Gazans, including progressively granting them more rights and services and targeting Jerash camp for improvement projects, ex-Gazans’ status and their particular location in Jerash camp continue to intersect to exacerbate their poor socio-economic conditions. 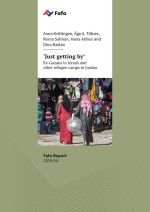