In terms of petroleum-related employment, Hordaland county is Norway’s second largest after Rogaland. Many of the municipalities in Hordaland also head the statistics in terms of their percentage of employment in the petroleum industry, with Stord at the top of the list (Ekeland, 2017). Since the fall in the oil price in 2014, however, the petroleum industry has undergone a restructuring that has entailed a marked drop in employment. Hordaland county council’s strategy for restructuring of the local petroleum industry points to small and medium-sized enterprises (SMEs) as a particular priority area. The main research question for this project focuses on the assessments that small and medium-sized manufacturing enterprises make when it comes to deciding whether to hire labour power directly or from temporary work agencies when there is a need for extra staff, and the role played by structural framework conditions in this regard.

The project is based on two main data sources. First, two workshops were held with the social partners to identify the structural frameworks that ought to be included in the project, and second, 36 structured interviews were conducted with enterprise managers and trade union representatives.

Hordaland as a manufacturing county

Hordaland is Norway’s second largest manufacturing county in terms of number of employees, after Rogaland and before Møre og Romsdal. The county saw manufacturing employment decline from 14 000 before the financial crisis to 11 000 in 2010. From 2011 onwards employment increased somewhat, but during the petroleum crisis in 2014–2016 it declined again from 12 000 to less than 10 000. Trends in the age composition among employees in manufacturing indicate that the workforce is gradually ageing, while recruitment of young people is difficult.

Enterprises whose activities are largely dependent on the petroleum sector have struggled since the fall in the oil price in 2014. Now, however, nearly all the enterprises that we have interviewed, including those that are not linked to the oil and gas sector, are envisaging positive tendencies in their markets. Most of the enterprises that we have interviewed expect to increase their staffing in the years to come. On the other hand, the enterprises are exposed to large fluctuations in their staffing needs according to their order volume. When the enterprises wish to increase their capacity they use direct employment, while short-term production peaks are addressed through temporary hiring, including from temporary work agencies.

Nearly all of the enterprises that we have interviewed report to use temporary hiring of labour as a strategy to cope with fluctuations in their staffing needs. A little more than one-half of the enterprise managers report to use labour from temporary work agencies on a regular basis. Others hire personnel from manufacturing enterprises locally on a temporary basis. The interviews with trade union representatives leave the impression that temporary hiring of labour is less prevalent than what is reported in the interviews with enterprise managers.

Many of the enterprises experience challenges associated with recruitment of qualified labour. Recruitment of young people to vocational education and training is highlighted by many enterprise managers as one of the causes of their recruitment problems, but there are large variations in the kinds of skills that the enterprises have problems recruiting. For some enterprises, hiring from temporary work agencies is a strategy to obtain skills they do not have inhouse, while others report that temporary work agencies fail to provide them with the specific skills they require. During our workshop, both enterprise managers and trade union representatives referred to productivity enhancements through implementation of new technology as part of a strategy to enable a 20 per cent increase in the level of activity.

A couple of enterprises highlight internal competence enhancement as a key element in their staffing strategy. Although internal training is described as costly and time-consuming, it provides the enterprises with flexibility in their recruitment processes, since they do not have to hire employees with specific qualifications.

Finding the right volume of basic staffing is described as a challenge for the enterprises, since they may face relatively large fluctuations in their markets. The enterprises therefore take care not to grow too quickly now that the business situation appears to be improving. They claim that markets will always be volatile and positive trends may easily be reversed. Increasing the basic staffing and permanent hiring is therefore a strategy that the enterprises use when the increased need for staffing appears to be stable.

The trade union representatives generally report well-functioning partnership relations, including in difficult times, when the management and trade unions discuss issues related to staffing on a regular basis. In these difficult periods, some enterprises were forced to establish local solutions, and the system of collective agreements has served as a good basis for dealing with challenging situations.

We can see some tendencies towards an ageing workforce in the manufacturing industries in Hordaland county, while many enterprises are struggling to attract the labour power they need or want. The lack of skills will not immediately disappear when times get better, as evidenced by some of the manufacturing SMEs that we have interviewed. The upturn in the oil and gas sector has caused the large enterprises to hire a growing proportion of the available skills base.

Many enterprises also claim that more active and targeted efforts must be made to strengthen recruitment to vocational education and training. One aspect of the recruitment problem that the enterprises are facing is that they attract few girls, i.e. half of each age cohort. Increasing the attractiveness of vocational education and training for girls could thus help improve recruitment. Some also refer to introduction of new manufacturing technology as a further strategy to increase recruitment to the industry, as this could help increase the attractiveness of the manufacturing industry among young people. On the other hand, widespread use of temporary agency work may be a barrier to recruitment of young people to the manufacturing industry. A sector characterised by temporary employment and insecure jobs will have greater difficulties in attracting young people than sectors that provide permanent employment and job security. 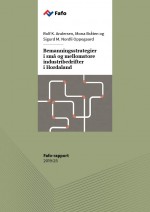