The restaurant industry – developments since 2014

In 2014, a report on the working conditions in the restaurants and bars was published. It gave a description of the industry with regard to characteristics of the employees and the enterprises, various forms of circumventions and breaches of laws and agreements were identified, and a set of indicators was developed to establish a kind of industry baseline. This report follows up the results from the preceding study, with updated knowledge on working conditions and unscrupulous operators.

All data were collected before the ‘lockdown’ due to the COVID-19 pandemic in March 2020. Thousands of workplaces were at risk, and many enterprises fear long-term loss of key competencies. In this report we do not take any possible long-term consequences of the pandemic into account.

The restaurant industry – which in this context includes restaurants and bars/pubs – has some structural conditions that mean that restructuring efforts may be challenging, mainly the composition of the workforce and high rates of employee turnover. Moreover, unionisation rates are low both among employees and employers. This means that the social partners face difficulties in promoting restructuring when compared to, for example, the cleaning industry, where large, organised enterprises can help drive such efforts forward. The restaurant industry is labour-intensive and has few requirements for formal competence. Hence, this industry also serves as an important gateway to the labour market for many people.

From 2012 to 2019 there was a considerable growth in this industry in terms of the number of both enterprises and employees. The number of alcohol licences has also increased. In 2018, the industry employed 67 500 persons, with approximately equal numbers of men and women. The workforce is young and includes many students working part-time. Among those who have their main employment in the industry, more than 60 per cent are less than 30 years of age. Nearly one-half (46 per cent) of the general managers in the industry come from an immigrant background, up from 35 per cent in 2012. Persons from an immigrant background also account for 46 per cent of the employees. There are fewer persons from the other Nordic countries, while there is an increasing proportion of workers hailing from EU countries in Eastern Europe as well as Africa, Asia and South and Central America.

Employee turnover rates are high. After three years, more than 70 per cent have left their employer, which is at approximately the same level found in the previous study (Trygstad et al. 2014:67). This is not very surprising, given the low average age of the workforce.

The survey shows that many workers continue to be denied the wage supplements to which they are entitled when working overtime, evenings, nights or weekends/holidays.

Restaurant industry employees often work unsocial hours and they can be subjected to stress, physical strains and demanding guests. Harassment, violence and substance abuse are among the working environment challenges. Approximately one-half of the respondents to the survey agreed that ‘the industry is best suited for young people’. On the other hand, 60 per cent report that they mainly look forward to going to work, and the level of sickness absence is equal to that in industry in general.

As regards working hours and the opportunity to take breaks, no changes have occurred since 2013 (the previous study). In recent years, much attention has been devoted to sexual harassment, not least in the context of the #metoo campaign. Compared to the previous study, there is an increase in the proportion of staff exposed to unwanted sexual attention, from 17 to 22 per cent. This increase could partly be related to the attention through #metoo, i.e. it has become easier to report about such problems. There is also an increase in the number who have been exposed to threats, from 14 to 18 per cent. Satisfaction with the social working environment shows a declining tendency from 2013 to 2020. The employees were also somewhat less satisfied with the relationship between the management and the workforce.

Legal infringements at the same level

The employees’ experiences of illegal conditions, such as same-day dismissal, unregistered work, employment of persons with no work or residence permit, sale of contraband and money laundering, are at the same level as in the previous study (2013). Representatives of the inspectorates point out that in pace with the increasing control efforts, the enterprises have adapted and become more creative. As a result, criminal activity can become more organised and often more serious. The content of labour contracts and working hours remain problematic areas. The Labour Inspection Authority also reveals frequent breaches of the provisions regarding the general application of minimum wage rates.

Little has changed in the restaurant industry in the years since 2014. This is shown by the employee survey and is confirmed by our informants. In terms of the efforts made to improve the conditions for employees, the general application of the collective agreement has left the clearest mark. It is difficult to point out any specific effects from the other measures that have been enacted in the industry. It is therefore conceivable that a more negative development would have emerged without these measures. This study shows that a number of the measures that have been applied are not yet well known in the industry, and this will obviously also limit their effectiveness. In addition, shifts in attitudes and practice are often time-consuming processes. 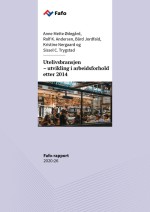