As part of a wider study examining the situation of Syrian refugees in Lebanon and the host population's responses to the influx of refugees and the wider Syrian crisis, Fafo has implemented a national opinion poll in Lebanon. Corroborating findings from qualitative fieldwork, a majority of poll respondents considers Syrian refugees a threat to national security and stability and two thirds fear that the Syrian conflict will lead to civil war in Lebanon.

The Lebanese have generally received their Syrian 'brothers' well, as witnessed by the fact that 8% of all Lebanese households now comprise at least one Syrian refugee and 20% provide or have provided accommodation to Syrian refugees. However Lebanese attitudes towards the refugees are being challenged. Not only are they blamed for security problems, but they are accused of stealing the jobs from poor Lebanese and receiving economic assistance to an unfair degree. As a potential solution to the pressure caused by the refugee influx, people want strengthened border control and, despite the skepticism to refugee camps due to past bad experience with Palestinian camps, two thirds are now in favor of refugee camps established by the UN. 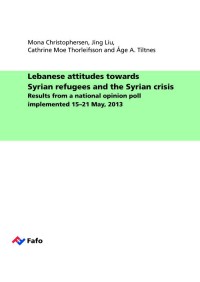