This report is about older teachers in primary and secondary schools. The report summarises a selection of recent research and statistics on retirement, workloads and the working environment in the school sector, including analyses of register data from Statistics Norway. Qualitative interviews were also conducted with a selection of older teachers at four schools, in addition to their school heads and employee representatives.

The following topics and research questions are elucidated:

Both the number and the proportion of older teachers in primary and secondary schools fell between 2010 and 2019. However, the proportion of older teachers who leave to take up other work is lower than before, and more are continuing to be schoolteachers for their entire career. In addition, the expected retirement age has increased. In 2019, a 50-year-old teacher with three years of teacher training could be expected to work until the age of 64 and 4 months, a teacher with four years of teacher training until 62 years and 11 months, and a teacher with a master’s degree until 63 years and 8 months. For school principals, inspectors and other staff in senior positions, the expected retirement age was 65 years and 1 month. These increases are due to the falling numbers receiving disability benefit and the fact that more people are remaining in work after the age of 62. More are also combining employment with retirement, as the proportion with graded disability pension among those receiving disability benefit and the proportion who take part-time early retirement have increased.

In a survey from 2012/2013, most teachers said that the reason they had postponed retirement was because ‘the work was still interesting and rewarding’, ‘they felt that their employer needed them’ and ‘they still enjoyed good health and did not feel worn out’. Finances also had a certain importance, as one in four said they were still working to increase the pension they would receive from the age of 67. It was also important for some that the job provides flexible working hours to some extent, that they have more days off/longer holidays, reduced hours of work, and/or the work was adapted when necessary.

Although many teachers work into old age, some still retire due to ill health or choose to take early retirement. The survey from 2012/2013 indicates that this is primarily due to health problems, the mentally demanding nature of the work, the lack of flexible working hours and, not least, a desire for more time off. One in four also reported that retirement of a spouse played a role.

The analyses by the National Institute of Occupational Health in Norway (STAMI) of the working environment section in the living conditions survey by Statistics Norway also show that teachers with a master’s degree and educationalists are more exposed to negative organisational and psychosocial working environment factors than the average worker. They are more exposed to reorganisation, job insecurity, job demands that interfere with their private life, a high level of role conflict and high emotional demands. Primary and lower secondary school teachers are also more exposed to job insecurity and job demands that interfere with their private life. They also report more often than average a low level of job control and self-determination, and high emotional demands at work, in addition to being more exposed to violence and threats. Several also report having to stand for most of the working day; a factor that can cause health issues over time.

Negative working environment factors can lead to health problems. According to STAMI’s analysis, teachers with three years of teacher training, teachers with a master’s degree and educationalists tend to have more work-related mental health problems than other workers, such as difficulty sleeping, headaches and mental fatigue at the end of the working day. Self-reported, work-related sickness absence and sick leave of more than two weeks are also reported by this group more often than average. This particularly applies to primary and lower secondary school teachers. According to a survey by the Norwegian University of Science and Technology (NTNU) from 2012, one in four teachers related their own sickness absence to conditions at work, such as severe time constraints, new demands and tasks, a generally large workload, disciplinary issues and concern for certain pupils.

Similar findings also emerged in our qualitative interviews with eight teachers (including employee representatives and safety representatives) and their school heads or principals in three primary and lower secondary schools and one upper secondary school in 2020/2021. Although the main impression was that the older teachers are valued, that the school needs the older and experienced teachers, and that age diversity is regarded as an extremely positive and useful factor in the collegiality among the teaching staff and the work with pupils, a number of challenges were frequently reported: intense pressure of work, constantly changing expectations and demands, physical adaptation, such as factors related to the school building and unsuitable workspaces for the teachers, in addition to noise, and highly challenging tasks, such as being a contact teacher, which was considered arduous work.

In general, however, few studies have had a special focus on the experiences of older teachers. It is therefore not known whether the older teachers have different perceptions of the various working environment factors and burdens compared to younger teachers, or whether some health problems are more prevalent among older than younger teachers. It is nevertheless conceivable that noise as a health problem and tinnitus/hearing loss, which is slightly more common than average among teachers compared to the rest of the working population, may be something that older teachers in the sector are more affected by than younger teachers, since hearing problems are often age-related. This is also supported by our interviews. The same applies to the strain of standing for long hours during the working day, which was particularly emphasised by the primary and lower secondary school teachers, as any health problems created by this type of strain must also be expected to increase with the number of years in the job.

The few studies that have been conducted on policy aimed at older teachers and associated measures in the school sector also indicate that a generally good working environment – more than the actual measures – has been a decisive factor in the late retirement age. A register-based analysis of the measures in the municipal sector in 2011 also found that the measures available to the local authorities for older teachers in 2007 had no demonstrable effect on the early retirement rate. The need to strengthen the leadership, management training and follow-up was therefore emphasised, thus enabling better follow-up of employees.

Our informant interviews, as well as previous studies of policies aimed at older teachers, showed that many of the factors that strongly influence policy and older teachers’ motivation and desire to continue are beyond the schools’ control, or are difficult to change in the short term. These include the economic framework and the physical building stock, the amount and type of tasks that are initiated and imposed by central authorities, as well as the agreement framework and the pension regulations. Designing an effective policy for older teachers can therefore be a challenge if these framework conditions are not also improved. The recently initiated reform in how staff work may be significant in this context, as it places particular emphasis on the need for change in the management systems and the need to increase teachers’ professional autonomy.

What the reorganisation of the pension reform will mean for the retirement rate is more difficult to assess. Although health problems, pressure and job stress are probably the most important factors for most older teachers when faced with the choice of leaving or continuing, a quarter also reported a higher pension as having a certain importance. New pension regulations that reward longer careers may see a rise in the number who want to continue working. However, gradual retirement is now a common component in adaptation measures in schools. A significant number of teachers combine early retirement with part-time working. The new flexible pension system will still enable gradual retirement, but it will be less financially advantageous. There may therefore be a need to develop new instruments and systems in schools to meet the need for adaptation among older teachers with health problems. 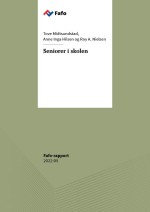