This study is conducted in the department of Risaralda, Colombia. Colombia has 32 administrative departments and Risaralda is located in the western central part of Colombia, in the central Andean region with a total of 14 municipalities. Pereira, the capital city of Risaralda, has the highest recorded rate of urban unemployment in Colombia. According to Departamento Administrativo Nacional de Estadistica (DANE) the unemployment rate in Pereira was 17 percent in September 2011. 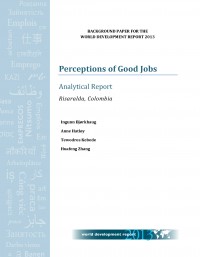