Wage and Working Conditions in the Gaza Strip
Bjørne Grimsrud

Together with Jerico, the Gaza Strip was the first area of the Occupied Territories to be handed over to the Palestinian Authorities in June 1994. In 1996 the Gaza Strip was still very much in the process of structural and institutional change. New structures were in the making, and individuals and institutions were redefining their behaviour within new economic and political frameworks. The Fafo-survey of wage and working conditions in the Gaza Strip, presented in this report, focuses on a central aspect of this process: changes in the labour market and industrial relations. The survey, undertaken in December 1996, concentrates on the formal labour market and on relations and working conditions normally negotiated in collective agreements 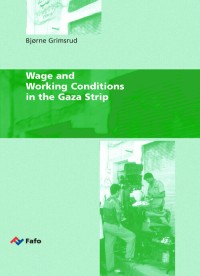