The under-utilization of the labour potential of women and the young constitutes a major disadvantage for Greece. The integration of young people and women in the world of work contributes to their own well-being, promotes social and intergenerational cohesion, and adds valuable resources to the economy, increasing its productive capacity and growth potential.

Given the economic and social impact of the 2010s crisis, and more recently, of the pandemic, strong economic recovery along a sustainable path is a challenge of the utmost importance and urgency for Greece. To this end, mobilizing human capital needs to be a top policy priority.

In this context, this study focuses on the difficulties that young people face both in accessing the labour market and in making their first professional steps once employed. The research places emphasis on the gender dimension by exploring in more detail the difficulties faced by young women. The study also draws on the expertise of Fafo in the institutions and dynamics of the labour market in the Nordic countries, to gain from knowledge transfer and policy learning.

There are three structural trends that have affected the integration of youth in the Greek labour market over the past two decades:

Over and above these structural trends, and the impact of the crisis of the 2010s, a significant structural feature, which also affects youth’s place in the labour market, is the mismatch between their educational qualifications and skills and those required by the economy. This problem relates to two other factors:

With regard to the place of young women in the labour market, despite the trend towards convergence described above, they still have substantially lower participation and employment rates and higher unemployment, long-term unemployment, and NEET rates that young men. There are two reasons for the differentiation be- tween the sexes, which occurs after their mid-20s. First, some women exit the labour market due to family commitments. Second, the demand for female labour is lower than that of men in these age groups.

In terms of ‘in-employment’ differences, the unadjusted gender pay gap is roughly 10 per cent; when age, educational level and sector of occupation are considered, but without correcting for self-selection, this drops to 7 per cent. It also appears that the gender wage gap is narrower for more recent cohorts. Also, women find it more difficult than men to reach the higher echelons of professional hierarchy. Finally, employed women rate all types of discrimination as more important obstacles to career advancement than men. This is an indication that women experience more intensely all types of discrimination.

As documented by our survey, this situation leaves youth with the impression that they are being discriminated against due to their age, and contributes to the problems of prolonged unemployment and labour market exit. It also contributes to the acceptance of jobs with lower qualifications or unrelated to their studies, which in turn leads some of them to a vicious cycle of low job satisfaction, lack of effort and unsatisfactory professional progress. Under these conditions, for a large part of Greece’s youth, attaining their overwhelming priority, work-family life balance, seems almost impossible. It is therefore not surprising to find that almost one in three are thinking of leaving the country in the coming years. The Nordic countries’ success in integrating young people and women into the labour market has involved: (a) a holistic strategy in line with economic needs and social priorities, and (b) an array of policy tools which include inter alia, active labour market policies for swift school to work transition (STW), a well-established VET system, localized and targeted policies for NEETs, a well-developed childcare system, generous parental leave with fathers’ quotas to encourage a more even distribution of parental leave between men and women, and the assignment of gender equality activity and reporting duties, to the state, the social partners and most importantly, to employers.

In this context, recent reforms in various aspects of the educational system and the labour market institutions, while positive overall, seem unconnected, and it is doubtful whether they will be able to have a significant impact on the integration of young men and women in the Greek labour market. 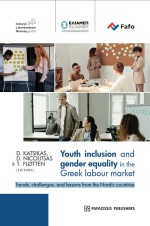