Child labour in Africa: Poverty or institutional failures?
The cases of Egypt and Zimbabwe
Bjørne Grimsrud and Liv Jorunn Stokke

There are considerable differences in the incidences of child labour between different countries at similar stages of economic development. This report examines non-economic or institutional differences in contemporary Africa, with the objective of identifying and describing links between institutional settings and the existence of child labour. It is the hope that this analyses will help to create space for a wider range of action against child labour by African governments as well as within development aid strategies by donor countries.

Fafo has produced this report with financial support from the Norwegian Ministry of Foreign Affairs as a background paper for the International Conference against Child Labour in Oslo October 1997. 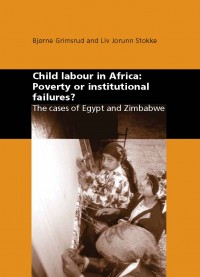