Our study shows that many of the student members switch over to regular membership. If we examine their status four years after first enrolment, 35 per cent are regular members of an LO trade union and 18 per cent continue to be student members, while 47 per cent are no longer members. There are significant differences between the various LO unions in terms of whether or not they retain their student members, and it is easiest for unions that organise within specific professions to retain their members. The study shows that a large proportion of the student members in LO switch to a different union, either by transferring directly or by enrolling in another LO union after a period of non-membership. Most unions have members who have been student members of an LO union other than that to which they originally belonged.

The study concludes that student membership helps recruit new members to the LO unions. LO’s organisational structure means that its student members may end up in jobs where other LO unions than the student’s original union organise. It is therefore important that membership actively fosters an LO identity, not only a union identity. 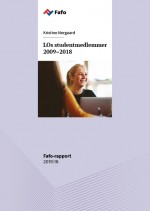