Franchises and corporate groups, Scope and characteristics in the private services industry

In this report we have identified the characteristics of franchise agreements and corporate groups as business models and their possible effects on the employees’ situation. The background for the study is the following decision by the Storting:

‘The Storting asks the government to elucidate the scope and characteristics of business models such as franchise, corporate groups etc., with an emphasis on the employer responsibilities and employee rights, as well as the position of franchisees in relation to the franchisors’ (Dokument 8:204 S (2017–2018).

There is no official definition of ‘franchising’, but it can be described as a business model in which one person with a business idea licenses trademarks, products and business methods to an agent (franchisee) in return for an agreed fee (NOU 2010:01). The relationship between the franchisor and the franchisee is regulated by a contract and a handbook/manual for the business concept (the franchise package).

Franchising is most widespread as a way of operating in the retail trade, which encompasses both groceries and other retail businesses.

Scope: number of enterprises and employees

This project investigates three business models: corporate groups, franchises and independent businesses in the services segment of the private sector. To date, no official overview of the scope of franchising in Norwegian industry has existed. In connection with this project we have therefore been the first to use accounting data to establish a distinction between franchisees and other enterprises.

The enterprises included in the analyses have an annual turnover of at least NOK 2 million and wage costs of at least NOK 500 000 (2016 level). Enterprises that did not meet these criteria were excluded from our study.

If we look at the services sector as a whole, relatively few enterprises are organised as franchises when compared to other business models. As of 2019, altogether 3 600 franchise businesses could be identified, whereof a little more than 2 800 were in retail trade. In comparison, 43 000 companies are affiliated with corporate groups, and 32 000 enterprises in the services sector are independents.

Enterprises affiliated with corporate groups employ 13 FTEs on average, and are thereby the largest as of 2019. In the same year, franchises and independent businesses employed seven and eight FTEs on average respectively. In the retail trade sector, franchises and corporate group businesses have approximately the same size, while the independents are significantly smaller.

In the services sector as a whole, the average size of franchises and corporate group businesses remained stable through the period 2008–2029, while the independent enterprises tended to vary in size.

Franchises in the services sector turned over a total of NOK 137 billion in 2019. This is more than twice the NOK 54 billion reported in 2008. Corporate groups and independent businesses turned over NOK 2 068 billion and 859 billion in 2019 respectively. In other words, the franchises’ proportion of total turnover in the services sector as a whole amounted to four per cent in that year.

Over the last ten years, the turnover in franchises and corporate group businesses has grown. Independent businesses have a smaller average turnover with a slightly downward trend in the same period.

When compared to corporate group and independent businesses, franchise businesses in the retail trade sector have seen a somewhat more negative trend in their profitability in the period 2008–2019. It is difficult to draw any conclusions as to whether this trend is attributable to different models or is a result of market conditions.

How is the role of employer perceived and exercised?

This part of the report addresses the role of the employers. The question concerns the extent to which the parent company in a corporate group and the franchisor make decisions that concern the employees in their subsidiaries and franchise businesses. In other words, the extent to which these entities exercise the real function of employer at the expense of the formal employer.

The data have been collected in the retail trade sector, mainly in franchises. A survey of the business managers’ freedom to exercise the role of employer returned too few responses to provide a valid answer to this question. The results are therefore mainly based on qualitative interviews, and are not representative of the ways in which the employer role is perceived and exercised within the various business models.

As regards the organisation of work, the role of employer is generally perceived as real. The number of employees, staffing plans and working hours are largely the responsibility of the business managers, irrespective of business model. Staffing levels, however, are associated with opening hours, which are not usually determined by the business managers. Opening hours tend to be determined centrally (by the franchisor or the parent company), or by the opening hours of shopping centres.

Most managers feel that they have the main responsibility for employee training. The majority of the business managers in both the independent and franchise businesses also believe that they have considerable influence on the employees’ wage level. On the other hand, most of them were also concerned about complying with the conditions in the collective agreement (even if they were not bound by it), irrespective of business model.

A franchise concept should be the same everywhere, and this is the reason why the franchisor controls how the outlets are run. This will have a direct or indirect bearing on the organisation of the work. HR polices and employee wage levels can both be made subject to instructions and control.

The relationship between the franchisor and the franchisee is a balance between options and instructions. For example, a franchisee can be instructed to use a work contract template and specific internal control systems, but can also be given options for various training packages for the staff. The various franchise packages may contain detailed HR procedures that the franchisee is obligated to follow. Some franchisors impose a requirement for the employees to earn wages that are at least on par with the minimum rates in the collective agreement. This streamlining is intended as an aid, but is also based on the fear that the brand value will suffer if the franchisee fails to operate the outlet appropriately.

The franchisor will normally take responsibility for parts of the franchisee’s administration (shared services). This will often include accounting and payroll, and it also gives the franchisors a large degree of access and control.

A franchisee benefits from many services that the franchisor provides. Moreover, when compared to establishing an independent business, there is less risk involved in opening an outlet within a system that is widely known and can provide help and support. Based on the information that has emerged, we may nevertheless question how real the role of employer is for the franchisees. Franchisees can hire employees, but will often have little say in matters such as work contracts, HR policy, training and pay levels, although this may obviously vary. In the absence of valid responses from the survey among business managers, we are unable to provide a representative picture.

Characteristics of the employees and working conditions in different business models

Registers from Statistics Norway (SSB) have been used to identify employees and working conditions in the period from 2008 to 2016. To as far as possible eliminate factors that vary across industries, we have concentrated on a single industry and a single occupational group – retail assistants in retail trade.

We are unable to draw any conclusions about the distribution of unionised workers by business model. In 2018, the total unionisation rate in retail trade amounted to 24 per cent (Nergaard 2020). There are many explanations for low unionisation rates, and some of these fit well with the situation for retail assistants: small workplaces, a young workforce, employees that combine a job with their studies, and workers with a low level of education (Steen & Nergaard 2018). In corporate groups, the group employee representatives have the opportunity to recruit members in the individual outlets. No such arrangement is available for franchises.

Another issue that came to light in the qualitative interviews is that many employees work for chains that operate outlets both under their own name and as franchises. This creates confusion among the employees regarding what provisions are applicable and who their real employer is. In large enterprises that operate a combination of self-owned outlets and franchises, the employees may have different rights even under the same brand name, which is directly associated with the business model. In view of this, the trade unions have called for more transparency, access and opportunities for co-determination in franchises. However, whether the business model is a decisive factor for the low unionisation rate and lack of co-determination is less certain. Variation between sectors, different product or service markets and the composition of the workforce may also help explain the low unionisation rate. 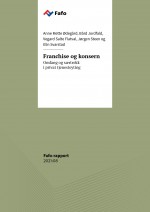