In 2018, training courses qualifying for government support and held under the auspices of approved adult learning organisations had a total of 480 000 participants. The goals of the adult learning organisations are to strengthen democracy, foster sustainable development, engage with and develop active citizenship, promote integration, motivate for competence enhancement, strengthen cultural diversity, increase participation in cultural life, supplement public education options and provide an independent arena for adult learning.

In this research project, Fafo has participated in five training courses arranged or supported by an adult learning organisation to observe the teaching and to interview course attendees, teachers/instructors and key personnel. We have also conducted two surveys of course attendees and teachers­/instructors respectively who participated in training courses in 2018. A total of nearly 6 000 attendees and teachers/instructors responded to the surveys.

The general objective has been to describe the participants’ learning processes, learning outcomes and motivations among teachers/instructors and attendees alike. In particular, we have focused on course attendees with few formal skills, in order to investigate whether these training courses can provide them with a new and more positive encounter with the educational system. Furthermore, we have studied the role that the adult learning organisations play for the teachers/instructors and attendees respectively, and whether those involved perceive the economic frameworks as insecure.

The main finding is that even though persons with a short formal education are underrepresented among the course attendees, this group reports that the training courses are more relevant for their present and potentially future jobs when compared to course attendees with longer educational careers.

Many of those who have little formal education reported that the opportunity to attend courses where they could make use of their practical work experience tended to simplify the learning process and make the studies more pleasurable. Some of them referred to themselves as not very motivated during their basic education, but after some years of work experience the new encounter with the educational system was to a far greater extent characterised by motivation and coping.

Moreover, it appears that the training courses are vulnerable to loss of devoted enthusiasts and poorer economic frameworks. A number of attendees report being in doubt as to whether to enrol or not as a result of the course fee, and many gave economic reasons for not having attended more training courses. The fear of poorer economic frameworks in the next semester may over time become a burden on both the enthusiasts and the attendees and reduce the sense of predictability. The enthusiasts in the adult learning organisations described the constant fear of cutbacks, through the state budget or through internal reassignment of funding, as tiring.

The general impression was that the attendees perceived the courses as useful and of high quality. The teachers/instructors were far more intrinsically motivated by a wish to disseminate their skills than by external motivations such as the salaries they received for their work. The learning community and the commitment of the course teachers were described in strongly positive terms. The community established by the courses appeared to be conducive to integration into a shared environment and establishment of contacts, and may thereby give rise to ripple effects that are difficult to quantify. 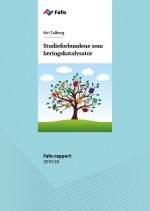