This report examines the experiences of kindergarten teachers and heads who have participated in continuing education and management training in 2017/2018.The issues we address relate to how participants in continuing education for kindergarten teachers and management training respectively assess the content, organisation, learning outcomes and quality of their courses. We also examine issues related to how the continuing education has contributed to changes in practice and the sharing of knowledge, the allocation of organisational funding and the reasons behind course drop-out rates.

The findings from the survey, the case study of the kindergartens and the interviews of kindergarten heads all showed that the participants – teachers and heads – considered the courses to be good, relevant and interesting, regardless of the field of study or learning institution.

The participants also described how the education/training was demanding, since the majority were undertaking it in combination with full-time work and family life.

The organisation of the courses as group sessions was generally considered in a positive light, and led to low absence levels from the kindergarten. It also enabled participants to meet other students and lecturers face to face, and to discuss the subject in a professional environment. Most participants found there was a good balance between theory, reflection and methodology. Some would have liked to work more specifically on aspects of their own kindergarten and to receive more guidance/feedback on written submissions.

The findings from the survey and the qualitative interviews reflected the importance of the organisational funding, both for covering the individual’s expenses and for the provision of temporary staff to cover absences. The survey also provided participants with the opportunity to comment on their kindergarten’s facilitation practices and its allocation of organisational funding. The responses imply consider-able differences between kindergartens in these respects.

In general, we find that most kindergarten teachers and heads are positive to the continuing education provision. Learning outcomes are high, the syllabus is suitably challenging, and the gains are beneficial. There is little variation in the answers, and little that separates the participants. 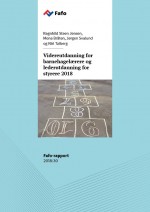