How is holiday pay set aside and when it is paid out?

Interviews with accountants and a business survey have clearly shown that holiday pay is normally recognised as an ordinary receivable in the balance sheet. Some businesses set aside the money in a blocked account, but this is not common. Holiday pay is then mainly paid at a fixed point in time, usually in June.

Have businesses been worried about holiday pay and have they managed to pay it?

This report has shown that some businesses have been concerned about how they would manage to afford holiday pay in the summer of 2020. However, our data indicate that this concern was unfounded in a significant number of companies that were unable to meet their holiday pay obligations. If we disregard the pandemic, there are also no indications that non-disbursement of holiday pay is common, other than in cases of bankruptcy.

In interviews with trade union representatives, it was revealed that they have dealt with a number of cases where holiday pay is not disbursed as it should be. When the unions are involved in such cases, they will usually tell the company to file for bankruptcy. In some cases, the situation is then resolved, and the company will find a way to pay the necessary amounts. In other cases, the company will go ahead and file for bankruptcy. In the latter case, the wage guarantee fund will secure full or partial payment. If the employees are not members of a union, triggering a bankruptcy process on their own will be more difficult.

How are holiday pay problems resolved?

In the interviews with accountants, some said that problems related to disbursement of holiday pay could be resolved in various ways; in some cases, by paying part or all of the holiday pay in July instead of June. In some cases, the problem was solved by the owners injecting more capital into the business to secure liquidity or by arranging a bank overdraft. In the survey of businesses in the private sector, companies that had been concerned about holiday pay in 2020 indicated that the problem was solved for the main part through layoffs, redundancies and other staff cuts.

The interviews with accountants in particular revealed that wages and holiday pay disbursements were the companies’ first priority. If a business had liquidity problems, it was other financial obligations that were deprioritised. However, it was also clear from the trade union representatives that non-disbursement of holiday pay was not an unknown phenomenon. 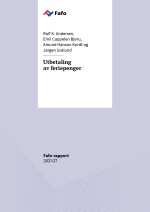