The report addresses how the negotiators from The Norwegian Civil Service Union (NTL) resolved to go from a joint agreement to two separate agreements. The report further addresses other challenges that arose locally in the state sector, what steps NTL took in their own bargaining and what financial implications the divide resulted for the members they negotiated on behalf of. 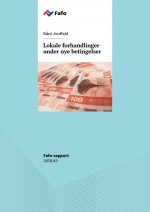