Retirement in the municipal sector

In this report we explore the following:

The estimates and analyses in the report are based on comprehensive registry data from the insurance providers in the KS tariff area, specifically Kommunal Landspensjonskasse (KLP) for the periods 2002–2005 and 2007–2019, and the Norwegian Public Service Pension Fund (SPK) for the years 2002, 2003, 2005 and 2007–2019. The registry data from KLP also include information on employees in the health trusts (except for the period 2007–2009). Since the health trusts employ many of the same occupational groups as the municipalities, such as auxiliary nurses, nurses and doctors, we have included some analyses of them as well.

In previous reports, the estimates of expected retirement age among 50-year-olds in the KS tariff area were based on the retirement patterns for employees aged 50–67. In 2017, some analyses that also included employees aged 68–70 were performed (Nielsen 2017b). In this report, such analyses are presented in Chapter 6.

When all early retirement schemes – disability pension, contractual early retirement pension (AFP), service pension with special age limits and the 85-year-rule – are included in the analysis, we could expect that in 2019, a 50-year-old municipal employee would keep working until the age of 60.9 years. Expected retirement age for a 50-year-old employed in the county administration was 61.3 years, and 63.2 years for employees in the school system.

Stability in early retirement over time

In 2019, approximately one in every four gainfully employed 50-year-olds in the municipalities (with the exception of those in the educational system) could be expected to be fully or partly retired at the age of 62 years, while one in every four could be expected to keep working until the age of 67 years. These results presume that their retirement pattern will be consistent with the retirement rates for the 50–67-year-olds in 2019. The results show a fairly similar pattern of early retirement in 2002 and 2010, although the figures for both these years are somewhat lower than the corresponding figures for 2019.

In the health trusts there was a small reduction in the rate of retirement before the age of 62 in 2019, while the retirement pattern for the 67-year-olds was the same as in 2002, and both rates were somewhat higher than in 2010. Approximately one in every five were fully or partly retired at the age of 67.

In the school system early retirement has notably declined from 2002 to 2010 and 2019 for employees in the age group 55–67 years. There has been a clear reduction in retirement up to the age of 62 years, and an even greater reduction among employees aged 63–67 years. In 2002, one in every five school employees was still working at the age of 67, while in 2019 this applied to nearly one-half of the employees.

Expected retirement age and retirement patterns differ considerably between men and women. The differences vary according to place of employment, but have also varied over time.

The gender differences have remained relatively stable from 2002 to 2019, especially in the school system. In the municipalities, counties and health trusts, the gender differences in 2019 are fairly similar to those seen in the early 2000s, even though they have increased since 2011. In recent years, the differences seem to have declined again. The increased differences are mainly caused by changes in the expected retirement age among men, since the changes among women have been smaller.

In the health trusts, the difference in retirement rates was also approximately the same in 2004 and 2019; 12 per cent of the men and 20 per cent of the women had retired at the age of 62 years in 2019, both a little lower than in 2004. Among women aged over 62 years in the health trusts, early retirement increased from 2004 to 2019, especially among the oldest, while it fell among men.

Most of those who retire early are disabled

Contractual pensions (AFP) are frequently used after the age of 62 years, and up to the age of 67 years, nearly 25 per cent have started to draw an AFP pension. Disability pensions, special age limits and AFP taken together mean that a little more than three in every four 50-year-olds employed in the municipalities and county administrations in 2019 can be expected to have retired before the age of 67 years.

Estimates for 2019 show that among the largest occupational groups in the KS tariff area, engineers and technicians, executive officers and office staff have the highest expected retirement age, while nurses and auxiliary nurses, social workers, child welfare officers, pre-school teachers and cleaners have a lower expected retirement age.

From 2010 to 2019, the early retirement rate declined both in the municipalities and the county administrations. In parallel, there was a small decline in the proportion of those who start drawing a contractual pension, although the AFP scheme accounts for the majority of early retirements, especially in the county administrations. Developments in the school sector have largely followed the same trend from 2010 to 2019: the rate of early retirement declined, while an increasing proportion of these take out the contractual AFP pension.

In general, the proportion of disability pensions in the different age groups appears to have declined somewhat from 2010 to 2019. The trend in retirement according to special age limit rules has developed differently in the municipalities and county administrations; the proportion has increased in all age groups in the municipalities, while the changes have varied across the county administrations.

The retirement pattern differs between men and women also in the county administrations, with women also having the highest rates of disability here, and the reduction in the disability rate was also mainly among women.

The disability rate is somewhat higher for women than for men also in the school sector and the health trusts, but when compared to 2010, this rate is lower for both women and men.

Increased use of partial retirement among women 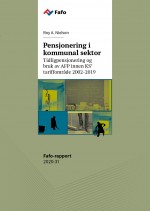