Violence, threats and harassment in the health and social care sector

The Norwegian Work Environment Act clearly states that all employees are entitled to a safe working environment. Never the less – the level of violence, threats and harassment remain stable – each year 7 per cent of the work force is subject to violence and threats according to Statistics Norway. Patients and clients are responsible for the main part of this working environment problem.

When people are the source of the problem, working with people become potentially dangerous work. Especially when the people in question is legally entitled to be served by the employees – in schools, nursing homes, institutions or shared homes for the mentally challenged or in hospitals and rehab. On the other hand – people have the right to apply for social benefits, welfare of other services provided by the welfare state as well as being part of childcare arrange- ments. Thus, countries with extensive welfare states, as the Nordic countries, hold the top ranking of violence and harassment at work. Female workers are far more exposed than men are because welfare state occupations are to large degree female occupations.

This report is based on a survey among members of FO (Norwegian Union of Social Educators and Social Workers), a LO affiliated trade unions organizing child welfare officers, social workers and social educators. Only violence, threats and harassment made by patients and clients was included in the survey, thus threats and harassment made by co-workers or management is not recorded.

Among the main findings are:

The survey also included questions on sexual harassment at work as well as harassment through social media. Among the main findings are:

Employees in child care homes/institutions and shared homes for the mentally challenged are the group most exposed:

76 per cent (childcare) and 71 per cent (shared homes) of these workers have experienced are exposed to violence and/threats the last 12 months.

All workplaces are, according to the legal regulations, obliged to systematic work in order to reduce any incidents. Risk analysis and action plans are impor- tant tools. The findings indicate that there is still a lot of work to be done and that employees and managers perceive the situation differently:

All incidents are considered as deviations from the requirements and should be reported. Managers and employees seems to have very different perceptions at this point as well:

The survey also looked into the social dialogue at the company level. The findings indicate that there is a large potential for increased dialogue on these matters, this applies both to the dialogue based on collective agreements and to the dialogues based on the arrangements in the Working Environment Act. 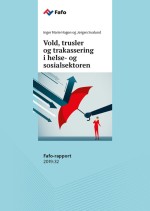