Once again, prostitution occupies a prominent position on public and political agendas, both nationally and internationally. A topic of concern and interest within social and academic realms, it is a highly moralised, contested issue that is at the centre of heated and drawn-out debates.

With each chapter dedicated to a separate country and written by a national authority on the subject, Assessing European Prostitution Policies seeks to explore how prostitution is regulated in 21 European countries, thus drawing out important implications for an effective and humane prostitution policy. Indeed, this innovative volume brings together systematic accounts of how national and local forms of governance influence the commercial market for sex as well as the lives of sex workers and third parties. All chapters cover the history of prostitution policy, national laws regulating prostitution, policy formulation and implementation, the national discourse on prostitution, the gap between national and local regulation, the impact of policy on the lives and rights of sex workers, and sex worker advocacy organizations. In addition to this, the authors examine and highlight how immigration, labour, fiscal and welfare law have as much impact on the sex trade as designated prostitution law.

A unique interdisciplinary title that is comprehensive in its coverage, Assessing European Prostitution Policies will appeal to undergraduate and postgraduate students, postdoctoral researchers, sex worker advocacy organisations and policy makers interested in fields such as Sexuality and Prostitution, Public Policy, Criminology and Gender Studies. 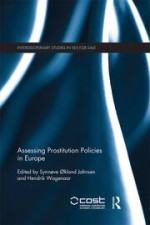