Against the Odds
How Palestinians Cope through Fiscal Crisis, Closures and Boycott
Gro Hasselknippe and Marianne Tveit

2006 marked a turning point in Palestinian politics. Hamas won the legislative elections and pushed Fatah out of government. The international sanctions of the Hamas government and Israel’s decision to withhold Palestinian tax revenues led to a fiscal crisis in the Palestinian National Authority. A bankrupt Hamas government was unable to pay salaries to public employees.
The present report depicts the efforts made by Palestinians to cushion the effects of the economic crisis. The study, which builds on fieldwork conducted in March 2007, argues that food aid and postponement of bills are key factors in explaining why a humanitarian crisis has not yet occurred in the West Bank and Gaza Strip. To compensate for wage reduction or unemployment, people sought to multiply their income sources. Those unable to generate cash income relied heavily on social networks.
Palestinian society is becoming increasingly aid dependent, and mobility restrictions on the West Bank and the siege of Gaza prevents economic recovery. While refugees benefit from UNRWA support, needy non-refugees are more vulnerable. 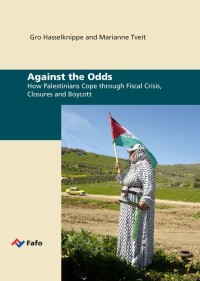