This report presents the tabulations from the Haiti Child Domestic Workers Survey (HCDWS 2014), a national household survey. The tabulation report documents the working and living conditions of child domestic workers relative to other children, the characteristics of the households where they live and perceptions of child relocation among Haitians.

The HCDWS 2014 is a part of the Haiti Child Domestic Worker Project. The main objective of the project is to establish a better understanding of the phenomenon and developments of children in domesticity in Haiti based on qualitative and quantitative data material, as well mapping the existing institutional responses.

The project was initiated by UNICEF, ILO, IOM, the IRC and the Terre des Hommes Lausanne Foundation, in cooperation with the Haitian state. A group of 28 different organizations supported the research and made up a Technical Committee acting as a reference group for the study. 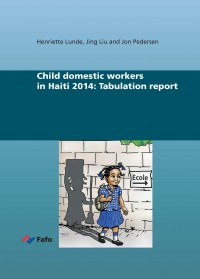