Gendering Human Security
From Marginalisation to the Integration of Women in Peace-Building. Recommendations for policy and practice from the NUPI-Fafo Forum on Gender Relations in Post-Conflict Transitions

During violent conflicts women are victims and survivors, but also fighters, leaders and activists. Yet, too often the memory of women's agency in conflict is short. Societies emerging from conflict may experience a redefinition of the role and status of women in society, resulting in the marginalisation or isolation of women from key peace-building processes. The resources of knowledge and capacity that women have developed during conflict are either lost or neglected. In January 2001, the Norwegian Institute of International Affairs (NUPI) and the Fafo Institute for Applied Social Science held a joint Forum in Oslo on Gender Relations in Post-Conflict Transitions. The Forum brought together over 40 professionals to explore gender and decision-making in post-conflict transitions.

Drawing on the observations and analysis presented by these participants, 'Gendering Human Security' explores some of the relevant gender dynamics and suggests recommendations for practitioners on how to integrate women in peace-building. 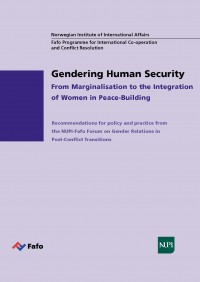