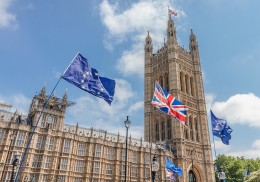 The theme for this breakfast was how Brexit may influence labour market regulation and employment relations in Europe, including Norway. Lecture by professor Paul Marginson, University of Warwick: «Opening a hole in Europe's regulatory floor? Brexit and employment relations». Comment by Jon Erik Dølvik, Fafo, and panel conversation with Peggy Hessen Følsvik, Deputy Leader, Norwegian Confederation of Trade Unions (LO) and Nina Melsom, Working Life Director, The Confederation of Norwegian Enterprise (NHO). The lecture was held in English. The comment and the panel conversation was held in Norwegian.

After years of turmoil, Brexit seems to become reality in some form or another. While the economic and political impact for the UK and EU have been debated at length, the consequences of Brexit for labour market regulation and employment relations in Europe have attracted scant attention – at least in Norway. With Europe’s second largest economy and labour market, developments in wages, working conditions, and labour market regulation in the UK will even after Brexit have significant impact on working life in the remaining EU/EEA countries which account for half of British trade. As Norway’s largest export market, the UK is an important haven for Norwegian investors, and companies and workplaces in major Norwegian industries face strong British competition.

The UK have for long been known for its deregulated labour market and demise of collective bargaining. It has also been famous for its blockage of important initiatives to strengthen EU/EEA-wide labour rights, and for its market-liberal approach to European integration and EU enlargement – both factors that fuelled labour migration and Brexit. Although Brexit will remove a political obstacle for strengthening of EU-wide worker rights, the possible emergence of a large «Singapore Light»-economy in the midst of Europe may strengthen downward pressures on labour standards, intensify competition, and put a chill on regulatory efforts in remaining Member States and EU/EEA arenas. Hence the title of Paul Marginson’s lecture, “Opening a hole in Europe’s regulatory floor?”

Issues for the seminar

The answer to that question depends on the political agenda Britain will pursue after Brexit, and on what kind of arrangements the UK and EU can agree upon, or not, in the negotiations of a new EU-UK trading agreement supposed to start when the Exit-deal is sealed and to finish in 2020. Where those negotiations will lead is impossible to predict, but what do we at present know about the possible pathways of British labour market policies and the agendas the different flanks of British politics are likely to pursue in such a context? What kind of responses can we expect from the EU, from national politicians in the EU/EEA Member States, and from the business community and social partners across Europe?

Few are better positioned to assess these issues than Paul Marginson. As former Director at the Industrial Relations Research Unit, University of Warwick, he has published extensively on developments in British, European, and global working life, and is one of Europe’s leading scholars in comparative studies of labour market regulation and employment relations. Lecture (in English): «Opening a hole in Europe's regulatory floor? Brexit and employment relations». – Questions from the audience. Presentation (pdf)

Jon Erik Dølvik, Fafo, will provide some brief background information concerning the relevance of UK policies and Brexit for Norwegian working life politics at home and at European level.

is a network consisting of companies, representatives from the social partners and the authorities. The activities - mainly website and seminars - are based on research and knowledge about the consequences of labour immigration to Norway. Our work is commissioned by altogether 25 participants.