Conflicts over local land rights between groups considered as "sons of the soil" and newcomers such as refugees can trigger autochthony-inspired violence. However, such conflicts are not always manifested, even when the conditions are in place. The question we explore in this article is whether such conflicts are less likely to emerge if the "other" is from a group with a longstanding bond of interethnic allegiance with the host community. Based on ethnographic data from host–refugee communities in Grand Gedeh, Liberia, we revisit previous attempts to explain economic and social relations between majority and minority groups. Our main finding is that in this part of Africa no prior special status will fundamentally alter the established ways of incorporating strangers into the community. 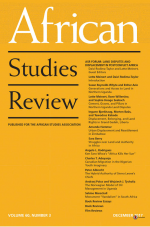