Asylum, integration and irregular migration in Lithuania
Policy and practice at the edge of the European Union
Anette Brunovskis and Silje Sønsterudbråten

Although geographically at the heart of Europe, Lithuania represents the outskirts of the Union with regards to migration. Even at the peak of asylum arrivals to Europe, very few people sought asylum in the country. Lithuania has relocated more than 300 asylum seekers from Italy and Greece in line with the EU relocation agreement of 2015 but, as with regular asylum arrivals, the majority leave the country after being granted refugee status or subsidiary protection. This situation provides the backdrop for this publication, which provides an overview of Lithuanian perspectives on three central policy fields related to migration: asylum policies, integration efforts and irregular migration. The report describes the systems, policies and practices in this field, and particularly focuses on issues perceived by the central implementing actors in Lithuania as challenges and barriers to this work. 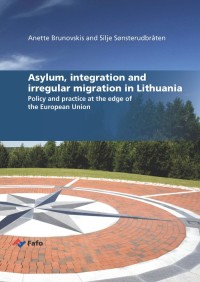