After the ‘Storm’
Economic activities among returning youths. The case of Voinjama. Research Program on Trafficking and Child Labour
Morten Bøås and Anne Hatløy

This report presents the results of a study on the formal and informal work children between 10 and 18 years of age in Voinjama district, Liberia are involved in. The results show that all the children have been away from their place of origin during the war either as refugees in Guinea or as internally displaced elsewhere in Liberia. The children that have returned are mainly the ones with close networks, either parents or close relatives. The children in this study are not currently under a high work pressure, mainly due to the fact that there still is a low level of economic activities in the community in general. The report is the sixth report in a series of working papers from a Fafo research programme on child labour, generously financed by the Norwegian Ministry of Foreign Affaires. 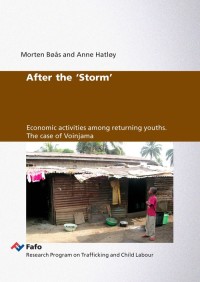