Achievements and setbacks in the fights against child labour
Assessment of the Oslo Conference on Child Labour October 27 – 30, 1997
Lise Bjerkan and Christophe Gironde

This report assesses the impact of the 1997 Oslo Conference on child labour and the status today of the issues addressed at that conference.

In spite of growing global public concern with the adoption of the Convention on the Rights of the Child (CRC) in 1989, international initiatives and actions were hampered by differences in approaches to child labour by key stakeholders. The Oslo Conference was successful in defining a common platform to combat child labour. Seven years after, there seems to be a new need for refocusing international strategies both to continue to mobilise donors and to increase impact of the work on the ground.

The report is the first in a series of working papers from a Fafo research program on child labour generously financed by the Norwegian Ministry of Foreign Affairs. 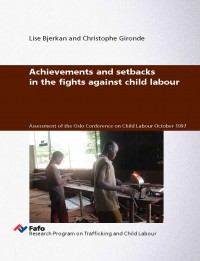