This report presents findings from a survey of knowledge of, and attitudes towards, HIV in Norway. Findings from the survey have attracted considerable interest in Norway. This English edition will also make the results available to interested parties in other countries, and hopefully contribute to highlighting the human and social aspects of living with HIV.

Key findings:
• On questions about condom use, most of the respondents answer correctly. On the other hand, with regard to knowledge about how HIV is not transmitted, a larger proportion answers incorrectly.
• Levels of knowledge vary with respect to gender, age and education.
• A majority agree that persons infected with HIV should be obligated to inform their employers about their HIV status. Half of the respondents believe that persons infected with HIV should accept that their employer could change their job responsibilities out of consideration for the safety of other employees.
• A majority finds it to be OK for persons infected with HIV to have parental responsibility. But when it comes to letting an infected person look after one’s own child or children, people exhibit a more restrictive attitude.
• An overwhelming majority thinks that everybody has a responsibility to avoid becoming infected with HIV.
The project on living conditions among people living with HIV in Norway is funded by the Norwegian Directorate for health and is carried through in cooperation with HivNorway. 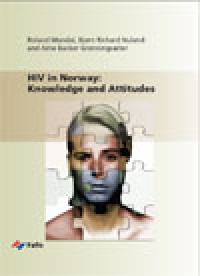