South Africa has given birth to a democracy and thereby to majority rule. But who is the majority? Which interests is the government to represent? What do people actually expect and want from democracy? It is easy to assume that if a majority of people supports a political party, the party programme is supported by a majority of the people. But does this assumption hold true?

Workers and the labour movement have been an important driving force behind the democratisation in South Africa. Many expect workers to be the backbone of the new fangled multiracial democracy. This book looks at some of the factors that shape working class consciousness and democratic culture in South Africa. The focus is on how South Africans view their own living and working conditions, the role of the unions and politics, democracy and the future. The answers are based upon a recent survey of interviews with about 1000 workers in and around Johannesburg.

Liv Tørres has lived and worked in South Africa for several years. She is particularly concerned with the political role and future challenges of the trade union movement. This report is published by FAFO, Institute for Applied Social Science, in the context of the Common Security Forum of which FAFO is a founding institution. The Common Security forum embraces scholars and decision-makers from Europe, Africa, Asia, North and Latin America who are devoted to exploring and promoting approaches to security that go beyond traditional military concerns. 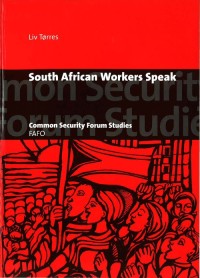