On the Margins: Migration and Living Conditions of Palestinian Camp Refugees in Jordan
Marwan Khawaja and Åge A. Tiltnes (eds.)

“On the Margins” takes a closer look at the living conditions of the Palestinian camp population of Jordan and presents statistics on a number of topics central to their welfare, such as population and migration, housing, education, health, work, and income. The analysis is based on survey data obtained from interviews of about 3,000 refugee families. Moreover, the report is supplemented by insights from focus group meetings in two of the camps.

One of the main findings of the report is that income poverty is more widespread in the refugee camps than outside. Efforts have been made to investigate the causes of this situation. Particular attention is paid to the effect of migration. “On the Margins” also looks at the camp residents’ human resources and labour force participation. It demonstrates that higher education increases workforce participation but that many young, well-educated women are unemployed; that higher education has only a moderate effect on earnings of camp dwellers; that camp refugees overwhelmingly work in the private sector; and that they are quite entrepreneurial.

The overall conclusion is that there is little reason to believe that camp refugees will ever catch up with the average Jordanian because of selective migration processes. Furthermore, the employed segment of the population tends to be involved in low-paid, low-skilled occupations.
The study was made possible by funds from Norway, the USA, Canada and Sweden. It was carried out by researchers from Fafo, Institute for Applied International Studies, Norway and Yarmouk University, Jordan, and was coordinated locally by Jordan’s Department of Palestinian Affairs. 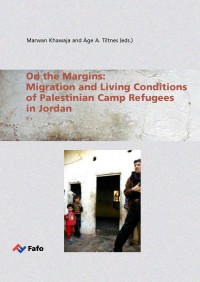