Efforts to combat family practices involving coercion and violence to prevent individual family members from deciding whom they will marry and whether to stay in a marriage have been on the agenda in Norwegian integration policy for more than two decades. In recent years, attention has increasingly also been paid to so-called negative social control: parental and family practices that involve control, pressures and restrictions on the lives of young people. Since the first action plans against forced marriages were produced in the 1990s, NGOs have played a key role in preventing and combatting such practices. In this report, we present results from a study of the effect of a national grant scheme for awareness-raising work by NGOs in the area of forced marriages and negative social control. The grant scheme is administered by the Directorate of Integration and Diversity (IMDi), and since 2019 also by 20 selected local authorities. We have investigated what kinds of organisations received grants in 2017, 2018 and 2019, what kinds of initiatives the grants have funded, and the groups that have been targeted by these initiatives. Furthermore, we have investigated the organisations’ understanding of the problems to be rectified and what is needed to effect change, and finally the organisations’ experiences with these initiatives and the grant scheme.

The study uses a number of different methodological approaches:

What types of organisations are granted support?

What types of initiatives have been granted funding?

How we understand a problem is important because this guides our ideas about how to solve it. This often occurs without the authorities or organisations linking the two. It is therefore important not only to identify understandings of problems but also to discuss them.
A clear descriptive finding that emerges from the survey in the organisations and the interviews in a sample of organisations is their unambiguous understanding of the problem: negative social control and forced marriages are regarded as a problem related to culture. The interview material highlights the understanding of this as ‘imported’ culture, meaning cultural norms and practices that individuals and families have brought with them from their countries of origin. We have referred to this as the culture and tradition perspective. In some contexts, it also comes to light that these norms and practices do not lose their importance through life in Norway, but rather the reverse – their importance is reinforced. We have referred to this as the identity perspective. The question of what culture means and in what ways is not problematised in detail in the interview material.
In addition, some organisations that have responded to the survey mention "little education" as a crucial factor for understanding negative social control and forced marriages. This thereby points to social approaches to the ways of understandings the problem in addition to the cultural ones. Gender perspectives are only rarely brought up when representatives of organisations (in the interview material) discuss approaches to forced marriages and negative social control.

The qualitative interviews indicate that different understandings of the problem have a bearing on how the problem is confronted and what kind of solutions are considered relevant. Actors who tend to take a confrontational rather than a consensus-driven approach more often appear to interpret the problem in light of what we have referred to as the identity perspective. If we imagine that communities, where negative social control occurs, could also become more closed off from society at large, it would be natural to assume that a confrontation is needed to halt this process. However, if we imagine that negative social control is a result of norms and traditions held by people and communities, but that they will abandon these in the encounter with new information, new experiences and new norms, it would be more natural to choose a more open and consensus-driven approach. The title of this report, ‘Dialogue and discord’, summarises the organisations’ different understandings of problems and solutions and the different approaches that are derived from them.
The organisations are in close contact with the users and communities, and this can make it easier for them than for the authorities to gain access to key target groups and get their message across. However, this requires the organisations to successfully build and maintain trust and legitimacy in the communities in question. In light of our data, it may appear that this type of trust-based initiative works best for organisations that take an open and non-confrontational approach. However, we can also see that some organisations consider their remit to extend beyond trust-based initiatives of this type. Some organisations believe that their mission includes highlighting problems and setting an agenda in both minority and majority communities. The more confrontational initiatives, which in some cases may trigger resistance and loss of legitimacy in parts of the minority communities, are especially seen as aimed at stirring controversy and helping raise awareness through public discourse.

The organisations’ role and satisfaction with the initiatives

The grant scheme – benefits and frustrations

The organisations are very satisfied with this opportunity to receive grants. However, the survey and the qualitative interviews reveal a fairly large amount of discontent and frustration regarding the design of the grant scheme. It is seen as especially frustrating that the funds are allocated in spring and must be spent before the end of the year. Many organisations feel that this impairs their ability to make long-term plans for their work, which is especially detrimental to the efforts to build trust in communities over time. In addition, it means that a lot of time and effort needs to be spent on applying for renewed funding for activities. This is especially challenging for organisations that employ permanent staff but lack a robust financial situation that could provide stability over time. It is least challenging for the largest organisations, as well as for the small ones that rely exclusively on volunteer activity.

The grant scheme for NGOs’ efforts to prevent negative social control and forced marriages should be continued. On the basis of this study, the following recommendations can be made: 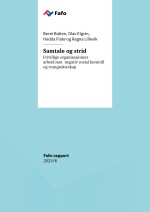