Gender equality is defined as a cross-cutting concern in Norwegian development aid – meaning that gender equality should be raised as an issue in all projects and funding. White Paper 24 presents an integrated view of the government’s development policies. Our document analysis is therefore organised according to the four main thematic priorities relevant to girls’ rights listed in this white paper. We omit, however, the thematic priority area of climate, renewable energy and the environment, because although the issue of gender equality and opportunities for women is mentioned, the ensuring of girls’ rights is not emphasised in any particular way. In addition to the four relevant topics from White Paper 24, we include a separate section on efforts to eliminate violence and harmful practices targeting girls and women, including female genital mutilation and child, early, and forced marriage, as reflected in the Action Plan for Women’s Rights and Equality in Norwegian Foreign and Development Policy 2016–2020.

With regard to efforts to ensure the equality and rights of girls and adolescent women, the sectors of education, global health, and sexual and reproductive health and rights (SRHR) in particular, including in humanitarian settings, stand out. The government’s engagement clearly conveys that ensuring girls’ rights to quality education is a strategic priority. Education is emphasised as a catalyst for development, poverty reduction, improvements in health and nutrition, and democratisation. In this context, it should be pointed out, however, that none of the white papers or strategy plans presents a broader gender analysis of educational trends, or addresses the common perception of mono-causality – especially with respect to gender – that surfaces in many assessments of education in developing countries.

Sexual and reproductive health and rights remain a main priority in Norwegian development cooperation related to girls’ rights, and the Government has promised to increase support for easy access to contraception and sexual and reproductive health services, including safe and legal abortion. UN organisations and the Global Financing Facility for women’s, children’s, and adolescents’ health form the main channels for this assistance.

Efforts to prevent gender-based and sexual violence in conflict settings is stressed in the description of the Government’s humanitarian aid priorities. The elimination of violence and harmful practices against women and girls (child, early, and forced marriage (CEFM), female genital mutilation (FGM), and other forms of gender-based violence) is also defined as a strategic priority area, although the prevention of CEFM currently seems to be an expected positive outcome of the increased investment in education, without specifically directed activities. Initiatives specifically aimed at combatting child labour, and its gender-specific forms, do not figure prominently in the Norwegian government’s stated priorities.

The transition from the Millennium Development Goals (MDGs) to the Sustainable Development Goals (SDGs) represented a new approach to how inequalities are formed and, by extension, opened the door to a life cycle view of the concerns of women and girls. The Norwegian government’s focus on education and health, as well as the ways that these foci are carried into the humanitarian space, reflects these concerns. However, the stated aim of improving girls’ education (access and quality, including in vocational training) is not included the priority area on private sector development and job creation. The latter strategic area would benefit from the formulation of clear goals aimed at making the most of investments in the education sector, facilitating the transition of adolescents of both genders into local job markets.

An analysis of Norwegian overseas development aid (ODA) shows that funding of projects that can be identified as ‘girl-related’ in public records are channelled largely to the target area of education – primarily through Norwegian NGOs, and mainly to projects on the African continent. This same overall pattern applies to projects marked with the OECD-DAC gender equality policy marker. The education portfolio is large and reflects the emphasis placed on this topic in strategic documents.

Based on findings in the analysis of official documents and ODA disbursements, and interviews with civil servants and NGO representatives, this report focuses on some of the challenges that arise in work to ensure girls’ rights and gender equality. To summarise, five challenges should be highlighted:

1. Girls’ rights – Mainstreaming of gender equality as a tool

An underlying notion in efforts to mainstream gender equality in reporting mechanisms on development activities and cooperation is that doing so will produce both consciousness about the gendered effects of project activities (‘Do no harm’) and interventions tailored to gendered needs. However, mainstreaming the gender perspective does not necessarily produce interventions tailored to girls’ needs. Therefore, projects specifically targeting gender – and specifically the gendered concerns of children and youth in SRHR, education, child labour, sexualised violence, gendered threats in conflict and during emergencies, and so forth – are needed to complement the general gender mainstreaming goal. Specifically targeted gender projects and mainstreaming gender are two complimentary strategies for securing girls’ rights.

2. The SDGs, youth, and gender – Girls and boys in development

An explicit aim of the transformative 2030 Agenda on Sustainable Development is to address the processes that produce inequalities. In line with the SDGs, the current emphasis on the rights of girls must not overshadow the specifically gendered needs of boys. Moreover, the life cycle perspective must encompass a gender dimension that includes the specific challenges of boys as well as girls. Given the signature status of gender equality in Norwegian policies, this perspective should be promoted as a stated goal in Norwegian development policies.

3. SRHR for girls aged 10 to 14 – A particularly sensitive issue

Girls in the age group 10 to 14 are in a particularly vulnerable situation. Within the health area of family planning and sexuality education, attention to the concerns of adolescents – including the age group 10 to 14 – should be intensified. Norway, along with like-minded donors, has pushed for giving more attention to children younger than 15 in SRHR, but these issues are sensitive and controversial. This is partly related to the so-called Mexico City policy, a United States government policy that blocks US federal funding for non-governmental organizations that provide abortion counselling or referrals or advocate to decriminalize abortion or expand abortion services. NGOs have a potential role to play in this context, as they do not have to weigh their input against the need to reach consensus in UN bodies to the same extent as governments do. Even though NGOs must navigate in relation to the ‘gag rule’ in order to obtain US funding, they still have more leverage than multilateral organisations. The diversification of channels for influencing the SRHR field for young adolescents should be recognised by NGOs and government institutions alike.

4. Youth, gender, and the life cycle – From education to employment

The Norwegian government’s global education priorities include a vocational training component. However, our document analysis shows that the potential benefit of prioritising girls’ education and vocational training is not included in the presentations of the strategic area of private sector development and job creation in any clear manner. Moreover, the transition from girls’ and women’s vocational training and education to economic empowerment is not made into an explicit concern. A more elaborate policy on this area should be developed to provide a link between education and women and girls’ potential for realising their full economic and political rights.

The prevention of CEFM and of child labour are stated as explicit goals of Norwegian development policies. However, these aims are not embedded in the organisational structure of Norwegian development aid administration. The lack of coordination may well be a consequence of the fact that the government has set other priorities. However, it also seems to be an expression of common mono-causal assumptions in the global education agenda, namely that harmful practices are caused by a lack of educational opportunities and thus will cease to exist if such opportunities improve. Though improvements in educational access do have a positive effect when it comes to preventing CEFM and child labour, ‘leaving no-one behind’ should include specifically targeted policies to reach children with complex vulnerabilities, those who combine labour and education (also domestic labour), or those who drop out of school to get married, partly as a result of bad educational quality or mismatches between education and local job markets. 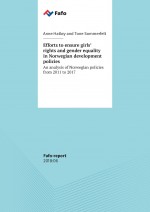