From participation to empowerment

In 2015, the Solberg government introduced a strategy to combat child poverty, in which 64 different measures are described (Ministry of Children and Equality 2015). One of these measures involves a continuation and reinforcement of the most comprehensive grant scheme in this area, the National Grant Scheme to Combat Child Poverty, as well as a research-based evaluation of the scheme (measure no. 28).

This is the report from the evaluation of the grant scheme. The evaluation has been based on three general research questions:

• To what extent does the grant scheme help improve the opportunities for participation in key social arenas for children and adolescents who are affected by poverty-related problems?

• Does the scheme help achieve a more inclusive environment for leisure activities?

• Is the grant scheme appropriately targeted and resource-efficient, when seen in light of the total sum of efforts to combat child poverty?

The objective of the National Grant Scheme to Combat Child Poverty is to counteract and/or alleviate the consequences of poverty among children and adolescents. Applications can be submitted for support to measures that help more children and adolescents participate in social arenas irrespective of their parents’ incomes and social situation. The regulations specify accordingly that the activities should come at low or no cost to the 19 participants. As an additional objective the initiatives should help establish a more inclusive environment for leisure activities in the municipalities.

The National Grant Scheme to Combat Child Poverty encompasses municipalities all over the country and eight selected boroughs in Oslo. Public bodies, NGOs and private agencies are eligible for support. In 2015, the year on which this evaluation is based, altogether 93 municipalities and eight city districts in Oslo received grants from the scheme for various measures under the auspices of the municipalities, NGOs or private agencies. In addition, 30 NGOs received grants by way of applications sent through their national organisation for measures that included at least three municipalities. The scheme also includes four initiatives established by NGOs that receive earmarked grants through the national budget. In 2015, a total of NOK 119 million was granted to 429 initiatives. In addition, NOK 27.6 million was earmarked for programmes undertaken under the auspices of the Blue Cross, the Red Cross and the Church City Mission. There is no available overview of exactly who and how many children have participated in initiatives supported by the scheme in 2015. According to the estimates made by the initiatives themselves of the number of people in the target group, it consists of 115 000 children and adolescents (the directorate’s casework file). Even though the target group for the scheme includes children and adolescents in low-income families, children and adolescents from outside the target group also participate in many of the initiatives. This comes as a natural result of the initiatives’ objective to be open, inclusive and non-stigmatising.

The main conclusion of the evaluation is that a lot of good work is undertaken to ensure inclusion of children in leisure and holiday activities and in alternative arenas for empowerment. The initiatives provide a broad range of activities, and both the respondents of the survey and the informants in the case studies believe that they have largely succeeded in providing programmes that are open to all, non-stigmatising and of high quality.

The activities have a high degree of continuity. Seven out of every ten initiatives in 2015 were reported to have been continued from previous years.

The local actors consider early intervention, development of attractive and varied activities that children and adolescents like to engage in, and having generally accessible, non-stigmatising programmes to be the main success factors for the efforts to combat child poverty. There is, however, a certain discrepancy between the factors that the local actors espouse as important on the one hand and what they in fact are doing on the other. This applies especially to early intervention. Less than 40 per cent of the local actors believe that they succeed in intervening early, while 90 per cent believe that this is essential. The distance between the ideal and the reality is shorter when it comes to development of non-stigmatising and attractive programmes.

The respondents from municipalities that receive grant funds appear to make greater efforts and succeed somewhat better than those who do not receive such funding. When compared to previous evaluations of grant funds that target poor children and adolescents, it also seems that the municipalities have become more aware of the challenges posed by child poverty, they undertake efforts in a more planned way, they collaborate more often with NGOs, and child poverty is more often on the political agenda. The respondents of the survey have opinions on the organisation and administration of the scheme. The report discusses the advantages and disadvantages of alternative models for the grant scheme. Although the evaluation points out certain weaknesses and challenges in the current grant scheme, it is important to bear in mind that the local actors consider the funding to be highly useful. The grant scheme provides the necessary latitude to ensure that special efforts are made, and it stimulates collaboration and innovation in programme development. 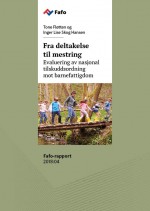