The importance of labour immigrants being able to communicate in Norwegian has increased in the last 20 years due to labour immigration and the growing internationalisation of the workplace. Language challenges at the workplace affect not only the employees concerned but also their employers and colleagues. The problems can impact on several areas, such as health and safety, knowledge about the working conditions, cooperation, productivity and the relationship with customers, service users and patients.

In this report, we have summarised existing knowledge on the subject, mainly from Norwegian sources. In addition, case studies have been carried out at a nursing home, at a university institute and in a construction firm. Foreign workers, their colleagues and managers were interviewed about the use of language at work and in their free time.

Since the record-high influx of immigrants from Central and Eastern Europe following the EU enlargement in 2004, language difficulties have been a recurring theme, both in research and in public discourse. This problem also applies to workers born in countries outside the EU/EEA. An important difference between refugees on the one hand and labour immigrants from EEA countries on the other is that the latter has no statutory entitlement to Norwegian language training.

In 2008, immigrants constituted 10 per cent of employed persons in Norway. By 2017, this had risen to 16 per cent, according to Statistics Norway. Immigration from countries in Central and Eastern Europe has dominated during this period.

The workplace is often regarded as the most important arena for language training and social integration.  Nevertheless, surveys conducted by Fafo among managers in construction, hotels and restaurants and manufacturing, in the period 2006-2017, showed that there were extensive language problems in the workplace, even in the study carried out in 2017, 13 years after the 2004 EU enlargement.

In a recent survey, carried out among labour immigrants from Poland and Lithuania that have settled in Norway, we asked about their skills in Norwegian and if they ever had attended a language course in Norway. 60 per cent reports about good skills in Norwegian, while 8 per cent do not speak Norwegian at all. Seven out of ten Lithuanians had attended language course, while just three out of ten of the Polish labour immigrants had done the same.

Poor language skills often lead to lack of knowledge about Norwegian labour regulations, making foreign workers more vulnerable to exploitation. At worst, language problems can lead to illness, accidents, marginalisation and dependence on welfare schemes. Language can also have an impact on status and the type of employment contract given to an employee.

Linguistic barriers are often associated with culture and should be considered in conjunction with training and organisation of the work. How employees express themselves can differ, and foreign workers may have a different kind of relationship with their employer. How they work with others and their relationships with customers, service users and patients may also differ. Various studies give examples of segregation in the workplace, both in the performance of the work and during breaks. One consequence of such segregation is that the construction industry has become less popular among qualified Norwegians.

In the health service, employees are required to be proficient in Norwegian. The employer is responsible for complying with the statutory language requirements. A 2012 survey showed that over 60 per cent of employees at nursing homes in Norway had had troublesome experiences due to the poor Norwegian skills of some staff.

It has become more common to recruit scientific staff in universities and colleges from abroad. Norwegian academics must publish internationally, and thus write in English. The pressure to produce English language publications has increased, causing a difficult dilemma in the choice between Norwegian and English.

The construction industry, nursing homes and universities represent quite different parts of the labour market. However, there are many commonalities when it comes to motivation and the opportunity to learn Norwegian. Among these are workers' attachment to the labour market (permanent or temporary), residence, demand for labour and perceived usefulness of language training and practice. Personal resources are another factor that causes similarities and differences between industries.

This project includes three case studies: a nursing home in Oslo, a university institute and a construction firm.

More than 40 per cent of employees in nursing homes in Oslo do not speak Norwegian as their first language. In 2009, the Oslo Municipality Nursing Administration initiated a comprehensive competence mapping process, and since 2010, foreign workers in the nursing care sector with poor Norwegian skills have been required to attend language courses. The language courses are free and are held during working hours. At the end of the course, the employees are tested to ensure that their language proficiency is at the required level. The language requirements have been criticized for being too stringent and were subsequently eased in 2019.

Experience from the Oslo Municipality Nursing Administration has shown that many foreign employees do not speak Norwegian outside the workplace. Consequently, their language proficiency diminishes over time. Nursing home employees, both those with a foreign and a Norwegian background, are accustomed to working in an environment with many different nationalities. The challenges relate to whether messages are understood correctly. Challenges also arise when culture, modes of expression and social conventions differ, and language problems can be a delicate matter to deal with. Language proficiency is also crucial when dealing with the elderly, and particularly those with dementia.

In the higher education sector, the primary goal when recruiting staff is to attract the best-qualified workforce, regardless of nationality. The foreign academic staff have both permanent and temporary links to institutes. One of the biggest challenges is that most of the teaching is in Norwegian. The official working language is Norwegian, including the administrative work. This imposes an additional burden on staff who are Norwegian (teaching and administrative duties). However, there are few language problems in daily working life as most people are used to communicating in English.

The University has decided that permanent employees must learn Norwegian well enough to teach during their first three years of employment. The motivation for learning Norwegian varies, and is strongest among those who have settled in Norway with their family and have a long-term perspective on their stay in Norway. Several of our informants believe that Norwegian language ​​needs to be higher on the agenda, and that policy is needed in several areas: national competence in the field, development of Norwegian terminology and quality of teaching.

In construction, it is easy to get a job – and to stay in that job – without learning Norwegian. Many workplaces tend to divide workers into groups by nationality in order to prevent communication problems and dangerous situations from arising. However, it is problematic that many foreign workers do not understand information about safety rules and requirements for protective equipment. Lack of communication also leads to misunderstandings and errors in the performance of the work. A survey showed that 40 per cent of safety delegates had difficulty communicating with foreign workers. Norwegian workers are more irritated by the lack of a common language ​​ than their foreign counterparts. Attachment to the workplace (permanent or temporary) and future prospects have been shown to have the greatest impact on the motivation for learning Norwegian. 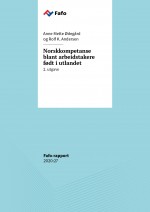