The general goals for Norwegian labour and welfare policy are ‘an adaptable business sector with high employment, economic and social security and a secure and well-functioning labour market’. A report prepared for the Norwegian Labour and Welfare Administration discusses how expected societal changes can impact on the debate on labour and welfare policy in the years until 2035. Future trends are generally hard to predict, and the coronavirus epidemic adds to this problem.

Along with the more long-term effects of the coronavirus epidemic, labour and welfare policy will be characterised by the challenges of climate change and the green transition, an ageing population, migration and new technologies.

High employment rates, relatively small wage differences and a strong ability to adapt are three characteristics of the Norwegian labour market. Working should be financially worthwhile, and as many as possible should stay in employment for as long as possible. Previous policies have helped ensure that we are a highly educated population with high rates of labour force participation among both women and men, and a high degree of social mobility.

Future developments will present us with numerous challenges. An ageing population brings higher costs, while the petroleum economy will be gradually phased out. The risk of exclusion increases with the income gap, and there will be fewer jobs for young people and immigrants with skills that are in little demand in the labour market. This may make for fiercer political battles over what groups and objectives to prioritise.

The social partners play a key role in labour and welfare policy. The preconditions for the Norwegian model, which includes tripartite collaboration between the social partners and the authorities, is that the unionisation rate among both employees and employers remains high and that the coverage of collective agreements is not significantly reduced. In recent decades, the unionisation rate among employees has tended to fall.

Labour and welfare policy also rests on the presumption that people trust the politicians and the authorities. Populism, which largely draws on distrust in ‘the corrupt elite’, has not become a major factor in the Norwegian context, even though we are also part of the international trend. For example, the debate on immigration and the urban/rural divide has to some extent been communicated in a more populist form in recent years. A high level of equality, strong trade unions, welfare schemes and a multi-party system have made Norway better equipped to withstand more forceful elements of populism and polarisation.

Unless we are exposed to unexpected and dramatic events, it is reasonable to assume that the political battles over the next 15 years will not concern whether or not to preserve the main features of the Norwegian welfare state. The Norwegian economy is solid, and there is cross-party consensus regarding the fundamental issues in this policy area. Most likely, the debate will focus on what instruments are most appropriate to achieve the goals, on priorities between various groups and objectives, and on adaptation of expenditures and revenues to ensure the long-term sustainability of the welfare state.

Although we can see – and most likely expect – increased fragmentation in voter preferences for the political parties, different government alternatives will continue to be based on blocs (government constellations) that neutralise the extremes.

The Norwegian population enjoys a high level of affluence and will want to maintain a high standard of living in the years to come. One of the main political challenges will thus be to ensure the sustainability of the welfare state. This can be achieved by reducing benefits and costs, increasing tax revenues and improving the efficiency of the public sector. In all these areas there will be disagreement regarding the direction and strength of the political choices that will have to be made.

With a view to reducing expenditure, debates regularly focus on whether some welfare schemes should be reserved only for those who need them most. Typical examples are the family allowance and the cash benefit, as well as whether user charges should be increased for those who can afford them. Yet another key question is whether all types of services, such as those within health care and education, should be provided in every corner of the country. In addition, progress in medical science combined with an ageing population will make for a virtually infinite demand for health services, making difficult prioritisations unavoidable.

In recent years, public benefits have increasingly been made subject to requirements for individual effort by recipients, such as in the ‘workfare’ scheme. There is every indication that these requirements for activity in exchange for public benefits will remain politically controversial. This also applies to issues such as full wage compensation when on certified sickness leave, and the conditions for disability benefit.

Potential welfare cuts will need to be balanced against the population’s expectations. If the gap between expectations and service provision grows too wide, there is a risk that the endorsement and legitimacy of the welfare state may erode. This can also happen if the inhabitants are left with the impression that the welfare state is ‘wasteful’ or if private solutions come to be seen as a better alternative.

The relationship between public and private solutions is a prominent battle line in Norwegian politics. This conflict is likely to be reinforced in the years to come, given the growing need for health and care services, tighter economic frameworks and the concern for more freedom of choice for users. On the other hand, outsourcing is being met with increasing scepticism, in the population as well as among local politicians. Opinions regarding whether private, commercial or non-profit agencies should perform tasks that are currently provided by the public sector vary by the type of service in question. This controversy follows the traditional right/left political axis, and the opposition to outsourcing is most obvious in the health and care sector.

The trouble with taxes

In the area of taxation policy, the political battle lines are clearly drawn, and the priorities will tend to vary according to which party is in the majority. The tax base and its structure include the level, the relationship between personal and corporate income tax rates, asset and property taxes and indirect taxation in the form of excise taxes (for example on pollution). The political right wing and the Norwegian Federation of Industry support tax cuts, not least to ensure that Norwegian businesses remain competitive in international markets and to motivate more people to work.

The voters’ willingness to accept a higher tax burden will depend on a number of factors. According to the ‘Norwegian Monitor’ population survey, acceptance of higher taxes has increased since the turn of the millennium. On the other hand, if the population perceives the quality of public services as poor, or believe that welfare schemes are being abused or granted to people who are not in need of them, their willingness to pay higher taxes may erode.

Virtually everybody will face changes to their job tasks and content. New technology and the green transition will represent two main drivers of restructuring and competence enhancement in the labour market in the years to come. Such restructuring will not necessarily mean greater job losses. However, it cannot be taken for granted that the same people will continue in their jobs from beginning to end of these restructuring processes. Older employees and workers with few formal skills may face more difficult restructuring processes and a higher risk of exclusion.

The pace of restructuring, the instruments used to achieve the green transition and the distribution of responsibilities between industry and the authorities will all be important. If the workers feel that the pace of restructuring is too quick, conflict levels in society will rise, leading to unrest in the workplaces.

The fact that many young people drop out of upper secondary education or complete it without achieving a vocational certificate or qualifying for higher education is yet another problem. Moreover, immigrants are strongly overrepresented in the group that has no basic or secondary education, and their employment level is lower when compared to the national population. In addition, immigrants are overrepresented in the least regulated parts of the labour market. Exclusion and lack of skills may thus have a mutually reinforcing effect. The combination of high skill requirements and relatively generous social benefits in the Norwegian model may raise barriers to entry into the labour market and also reduce the economic incentives to seek paid work.

The political debate in this area will be associated with the funding and facilitation of measures to stimulate and ease the restructuring efforts. Here, the social partners will play a key role in policy design and implementation, in collaboration with the Norwegian Labour and Welfare Administration and/or private agencies.

Balancing the goal of high employment rates against generosity in the social benefits system is one of the key challenges for labour and welfare policy. There is disagreement as to how harshly those who are outside the labour market should be treated. Furthermore, there is concern as to whether inclusion measures could undermine existing wage levels and labour conditions, for example for those who need to combine work and state benefits. Many European countries are facing an increasing problem of ‘the working poor’ who combine low-paid work in the services sector with various forms of targeted state benefits. This may also push the benefit levels downwards and thus degrade the living conditions for those who are totally dependent on state benefits. The more the balance between the working population and the benefits recipients is upset, the more heated the debate can be expected to become, fuelled by questions of who should be considered to be ‘the deserving poor’. The outcome could be an acceptance of a situation where even larger groups than today have no possibility of finding a job.

Requirements and expectations for the NLWA

There are grounds to expect political pressure for more efficiency in the operation of the Norwegian Labour and Welfare Administration (NLWA). Having a large public sector that provides welfare services and other collective goods has been a political choice in Norway. For many years, however, the growing government bureaucracy has been subject to political debate.

Today, many NLWA employees feel that they are facing a virtually insurmountable task in their attempts to achieve the goals of the employment promotion policy. Furthermore, there are growing expectations that public agencies should collaborate and coordinate their activities to better succeed with inclusion. A situation where reduced allocations to NLWA are combined with political instructions to apply more ‘tailor-made’ solutions to provide more targeted help to vulnerable groups is not inconceivable. Increased digitalisation is likely to require a simplification of the regulations and communication with users. On the one hand, automation may free up resources for other tasks, but may also necessitate more control measures on the other.

Furthermore, higher levels of means testing and discretionary judgment in the frontline services of the welfare state may give rise to a wider debate on the justification and quality of the benefit schemes, and also on the way in which NLWA executes its mandate. 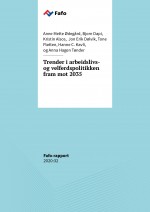