Chapter 3 shows that the self-employed share many characteristics with employees within their industry, but tend to be older on average. This indicates that those establishing themselves as self-employed tend to do so after working for some time in the occupation/industry. There are clear variations in income levels between different groups of self-employed workers. Those in the private service industry and personal services (cleaning, hairdressing, beauty care) or in the art, culture and creative sector earn on average fairly little, in the sense that they earn less from their business activities than other self-employed persons. This also applies when we look at occupational income as a whole and at gross income. It is therefore reasonable to assume that in these industries we might find a large group of people who will have difficulty in setting aside funds for a buffer, alternatively for additional social insurance or in a pension savings account. In the transport industry, with the exception of taxi services and road haulage, the picture is more varied. This group as a whole, which also includes courier services, does not significantly differ from the average for all self-employed. However, this is a complex group, in which many combine self-employment and regular employment, and a fairly high proportion transitions to regular paid employment. It is not unusual for self-employed workers to combine business and wage incomes. However, only a relatively small proportion maintain significant wage incomes over time. The proportion is highest in the art and culture industry, but even here, those who earn combination incomes of any significance are in a minority. Those who stay in the industry over time are less likely to combine business and wage incomes.

Adaptation of welfare schemes to individual groups needs to relate to the welfare system in which they will be included. In Chapter 4, we discuss the existing schemes for pensions, unemployment benefits and sickness benefits for self-employed workers, and we have also examined the structure of these schemes in the other Nordic countries. In general, we can distinguish between mandatory and voluntary schemes, where Finland and to some extent also Iceland have chosen mandatory solutions, while Norway, Sweden and Denmark have voluntary schemes. The nuances in the voluntary schemes consist in their structure and the choices offered. A challenge associated with voluntary options is that from the perspective of the self-employed person, making use of them is not necessarily a real choice. With a low income, the proportion that can be set aside for making ‘sensible choices’ will be lower, and the real freedom of choice is reduced.

In Chapter 5 we identify the greatest challenges that self-employed workers and freelancers face when it comes to income security. Low income is a fundamental problem and explains why so few in this group save for a retirement plan or buy insurance that can cover loss of income in periods of illness or unemployment. The taxation system also plays a role. In particular, the different ways in which the tax allowance is calculated for self-employed and employed workers is pointed out as a problem. While employees are granted a standard allowance, the self-employed deduct their expenses from their business incomes. This deduction can be smaller than the standard allowance, and it also lowers the pensionable income. Our informants were also concerned with the choice of single proprietorship versus limited company as the form of business organisation, and some argued that the difference between the organisational forms was excessive for those whose incomes vary greatly from one year to the next. The question is whether solutions can be identified to even out the tax implications of fluctuating incomes.

In this chapter, we also examine challenges associated with various welfare benefits. In general, self-employed workers have poorer coverage under the national insurance system for sickness benefits, but they can buy insurance that guarantees payments equal to those for employees. Self-employed workers with low incomes may have problems prioritising such insurance premiums. Advisors and self-employed workers also note that units in the Norwegian Labour and Welfare Agency (NAV) may have little knowledge about self-employed workers or people with combination incomes, meaning that responses from the units may vary. Moreover, those who have worked for many different clients may have difficulty obtaining all the necessary documentation.

Unemployment benefit is granted only to employees and freelancers, and not to self-employed workers. Their ability to cope with brief periods with no income may vary, but most of the self-employed workers whom we have interviewed report being able to make ends meet. The lockdown caused by the COVID-19 pandemic in March 2020 was particularly problematic. The compensation scheme helped some more than others, and normally no such scheme is available. However, some informants clearly state that the ability to secure enough assignments to earn a sufficient income is a precondition for being self-employed.

Our informants highlight pensions as their greatest problem. Few of the self-employed and freelancers in the lowest income brackets have established a pension plan, and they often have little knowledge about what pension payments they can expect from the national insurance system. A further problem for self-employed workers is that saving for a retirement pension will reduce the pensionable earnings in the national insurance system as well as the life-long pension for those with the lowest incomes. For these workers, the alternative is to buy individual pension insurance, but this scheme allows only a maximum contribution of NOK 15 000 (approx. 1 500 euro) per year.

The informants have differing opinions as to whether the welfare schemes for self-employed workers and freelancers should be mandatory or voluntary, and whether they should be universal or targeted. Mandatory schemes can be funded by a tax imposed on the self-employed or by a client tax imposed on clients. Some are concerned that increased taxes will drive down their fees, while others believe that this can gradually be worked out. Voluntary schemes can be designed in a variety of ways, but it is hard to know how strong the incentives need to be in order to increase their uptake among self-employed workers from the current level. Other types of schemes might also improve the situation for the self-employed, and the need for measures to improve knowledge about the various schemes and regulations both in NAV and among the self-employed themselves is pointed out.

In Chapter 6 we discuss how the schemes designed to ensure pensions and incomes in non-working periods can be improved for self-employed workers and freelancers, and we point out that there is no single solution to resolve the challenges that this group faces. Finally, we outline some possible roads ahead. 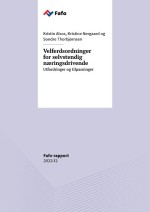