Since the 1980s, wage regulation in Europe has been marked by decline and decentralization of collective bargaining. Since the turn of the century, this trend has been reinforced by increased mobility of labour and production factors in the wake of EU’s eastward enlargement, the economic crisis hitting especially southern Europe hard, and the deregulatory political intervention in labour markets instigated by EU and the Troika in these countries. How have these upheavals affected wage regulation in Northern Europe, which has been considered as the bedrock of coordinated collective bargaining and generally was less affected by the crisis?

This is the issue addressed in this Fafo-paper, analyzing developments in wage coordination, articulation between bargaining levels, and wage floor regulation in six Northern European countries (Germany, the UK, and four Nordic countries). Concentrating on the impact of European cross-border developments and actor responses to them – especially among organized employers – it asks whether changes in northern wage regulation have mainly been driven by spill-over from the changes in southern Europe (South to North contagion); the EU’s new economic governance regime (Transnational disruption); strengthened regime competition among the northern, high-cost countries themselves (North-North competition), and/or the surge in East-West mobility after the EU/EEA enlargement (East-West destabilization). 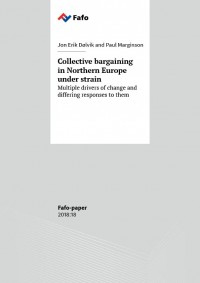