There is increasing demand for private military services in today’s global marketplace. That demand is being met by a relatively new creature. Half-mercenary, half-service sector offshoot of the military-industrial complex, the private military company (PMC) has emerged in recent years to occupy a prominent position in today’s battlefield. But at the same time that these ‘market forces’ seek to establish their legitimacy, they face the reality that the privatisation of the use of force – long a monopoly of the state – remains deeply contested. In Market Forces, Dr. Joanna Spear looks beyond the corporate personality of the PMC and finds that because of what they do, who they hire, and who they work for, the debate over the legitimacy and use of PMCs is likely to continue for years to come. Dr. Spear makes several suggestions about how to approach the issues raised by the privatisation of military activity and outlines several steps forward in the development of policies to grapple with the phenomenon. 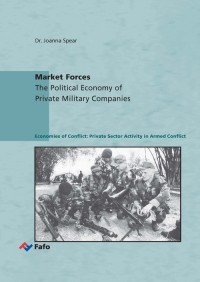