This is the first survey ever to have been undertaken among resident migrants in Norway. A total of 1000 Polish and Lithuanian workers were asked about their working and living conditions. The majority of them have lived in Norway for many years, are permanently employed and rarely exposed to unfair treatment at work. However, they are concentrated in specific parts of the labour market, earn less than the Norwegian average and fewer of them are homeowners 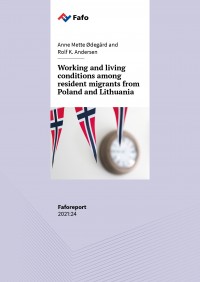