On May 12, 2008 a magnitude 8 earthquake struck Sichuan province in southwestern China. One of the worst natural disasters in modern Chinese history, it left 87,000 people dead or missing, 370,000 injured and more than 5 million homeless. Roads, villages, schools, homes and lives were lost and destroyed. What is the situation in the earthquake affected areas like today after 10 years of massive reconstruction efforts and rapid development?

Two months after the Wenchuan earthquake, a joint research team of Chinese Academy for Science and Technology for Development (CASTED) and Fafo conducted a rapid needs assessment of the earthquake-stricken areas. The survey was repeated in 2009, 2011 and 2018. Four rounds of large-scale surveys make up a unique source to track the living conditions and reconstruction efforts in the earthquake affected areas. The report “Constructing a Future: Ten years after the Wenchuan Earthquake” gives a glimpse of the overall reconstruction efforts, developments and changes within the area over the decade since the earthquake struck.

In the immediate aftermath of the Wenchuan earthquake, the people, central and local government rapidly started massive reconstruction efforts to rebuild communities, homes and lives. Even though many wounds cannot be healed and time cannot be turned back Sichuan has reemerged, through reconstruction and through development.

A joint research team of Chinese Academy for Science and Technology for Development (CASTED) and Fafo conducted a face-to-face household survey immediately after the earthquake. The survey was repeated one year, three years and ten years after the disaster. The four rounds of survey provide unique data about the transformation of the earthquake-stricken area over a decade: from destruction to reconstruction and on to further socio-economic development.

The area devastated by the earthquake was nearly completely rebuilt after two years, particularly with regards to housing and infrastructure. Trust in the institutions of society remains high, and there is little to suggest massive discontent with the reconstruction efforts. The forms of economic activities have dramatically changed in rural areas, and migration appears widespread.

People’s participation in the labor market has dropped in rural areas and particularly among women. Nevertheless, unemployment has stayed low in the area. As a backward area in Sichuan, the wages in the earthquake-affected area were rapidly falling behind other parts of Sichuan when the earthquake struck. However, after the earthquake, the growth rate in wages in the area caught up to nearly the level of all of Sichuan, although the absolute difference increased.

Schools and health services were rebuilt in the new communities and coverage of health insurance has greatly improved. The major improvements in public services were accompanied by new challenges: for example, schools were too far away from people’s homes and many young children had to attend boarding schools; education related costs and health costs were still a major concern to people.

The reconstruction effort of the Chinese government after the Wenchuan earthquake has been successful in rebuilding rapidly. Many of the aims set in the overall reconstruction plan in terms of material well-being and increased income have been achieved. Some of the reconstruction policies implemented by the Chinese government were unique and proved to be successful. Whether Chinese experiences and success in disaster recovery after Wenchuan earthquake is unique to the Chinese context or can be implemented by other countries and regions should be explored.

Over the last ten years all of China has experienced dramatic changes and economic transformations. The living conditions and economic development in the earthquake affected area have generally followed the overall development trend of the rest of the country. After experiencing a devastating earthquake, the area has recovered quickly and returned to a normal track of development. While the reconstruction plan aimed for an unleashing of innovation in the economy and society, there are few signs of reconstruction efforts having led to new modes of growth in the area. The area has followed a rather similar trend of development as the country as a whole. Moreover, the challenges faced by those who experiences the earthquake in 2008 are many of the same as for the rest of the Chinese population. .

It is difficult to tease out whether the development in the earthquake affected area was directly caused by the earthquake and reconstruction or by the general developments of China’s economy and society. Nevertheless, the present report is a starting point for that discussion. 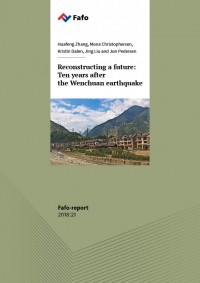