In this report we investigate unionisation and social partnership in the member enterprises of Samfunnsbedriftene employers’ association. Samfunnsbedriftene is an independent employers’ association affiliated with the municipal sector. Most of its members are municipal or county enterprises, intermunicipal enterprises or limited companies owned by municipalities. In addition, some enterprises are part of a municipal administration or private or non-profit enterprises that provide services to the municipal sector. The members are found in a variety of industries, but many of them operate in areas such as energy, port management, recycling and waste management or fire and rescue services.

The underlying data consist of register information about employees from the digital system employers use to report wage and tax information to the tax authorities (‘a-ordningen’), linked to information about the enterprise’s membership status in Samfunnsbedriftene and about whether or not an employee is entitled to tax exemption for union dues. We do not know what union the employees are in, only that they benefit from the tax exemption. These data are used to estimate the unionisation rate. In addition, we have conducted a survey among the member enterprises in Samfunnsbedriftene (the employers), asking for experience of unionisation and social partnership. In the survey we asked enterprise leaders about the company level unionisation rate and the ways in which the trade unions at their work place approach recruitment in the enterprise. Furthermore, we investigated what kinds of arenas are used for employer-union collaboration, the kinds of issues that are made subject to discussion and bargaining, and whether the leaders in the enterprises organised in Samfunnsbedriftene perceive the cooperation with trade unions as constructive and useful. Approximately one-half of all the member enterprises responded to the survey.

Our data show that 73 per cent of the employees in Samfunnsbedriftene enterprises are members of a trade union. This is approximately the same level as in the municipal sector, a little lower than in the central government sector and a little higher than in other publicly owned enterprises in general. In the private sector, unionisation rates are significantly lower. The unionisation rate is considerably lower among employees under the age of 25, newly hired employees, immigrants with a short period of residence, employees who work short part-time (less than 15 hours per week) and among senior managers. These groups tend to be less frequently unionised also in other industries. The unionisation rate is highest among employees aged 55 to 64 years and those who have long seniority in the enterprise. Moreover, the study shows that within a relatively short time, younger workers and newly hired employees also tend to join the union. In other words, the tradition for union membership remains strong among employees who have a stable and permanent employment relationship with an enterprise which is organised in Samfunnsbedriftene.

We also asked the member enterprises whether any groups of employees stood out from the others in their enterprise in terms of being more frequently or more rarely unionised. Leaders, administrative staff and employees with higher education are frequently portrayed as having a lower unionisation rate when compared to other groups. Furthermore, some employers report that newly hired employees tend to be less frequently unionised. Skilled workers are a group that is often pointed out as being more frequently unionised than others. These assessments corresponded well with what we found in the registry data.

Since this study encompasses only the employers, we need to allow for the fact that they may not be familiar with the details of the unionisation work among the rank-and-file employees. We nevertheless asked for their views on trade union recruitment. The majority of those who responded confirm that there is a tradition for unionisation in their enterprise, and large enterprises return this answer more often than small ones. A minority, however, deny this assertion, and some answer ‘neither/nor’. In a fairly large proportion of the workplaces it is common for newly hired employees to be introduced to the union representatives and the impression is that unions try to recruit new staff. However, practices vary widely. One in every four enterprises deny that new staff are usually introduced to the union representatives, and only 45 per cent report that it is fairly true/very true that they follow such a procedure. Thus, there is room for more systematic unionisation work in the Samfunnsbedriftene enterprises.

The study shows that the collective institutions are being used. The social partners meet regularly in formal meetings, such as the working environment committee, and they communicate informally on a regular basis. In other words, we find a well-established framework for social partnership. Wage levels, working hours and various types of special agreements (særavtaler) are the most frequent items on the agenda. In addition, topics that concern restructuring and corporate law, such as transfers of undertakings, are also discussed.

The employers take a largely positive view of the company level cooperation with trade unions and shop stewards. Most of them see it as constructive and as an advantage for them as employers. Most of them refer to how such collaboration helps resolve conflicts and establish a shared understanding between the management and the employees. Fewer, but still a majority, tick the answer saying that the social partnership has measurable effects on sickness absence and operational efficiency. A minority (23 per cent) claim that cooperation with unions delays restructuring processes.

Challenges for the social partners in Samfunnsbedriftene

On the whole, we can say that the member enterprises of Samfunnsbedriftene operate within the Norwegian industrial relations model as it tends to be portrayed in its ideal form, with institutions, contact and processes that bridge the gap between the management and the employees and provide outcomes that benefit both parties. This also means that a weakening of the model in the form of falling unionisation rates will affect a framework which is important to the enterprises.

As regards enhancing the unionisation rate, we would especially highlight the importance of reaching out to recently hired staff with an offer of union membership. Reaching these will also mean reinforcing the unionisation rates among young employees and those who have recently arrived in Norway. Some industries also have lower unionisation rates, for example waste management enterprises. This cannot be explained only in terms of differences associated with those who work in the industry or in terms of whether the enterprises are large or small, but indicates that the tradition for joining unions can vary across Samfunnsbedriftene enterprises.

Although the survey among the leaders mainly confirm that unionisation goes well in the workplaces organised in Samfunnsbedriftene, some procedures may warrant strengthening. This includes, for example, ensuring that new employees are introduced to the elected union representatives and receive an offer of joining the union shortly after taking up work in the enterprise.

The unionisation rate and the social partnership in the Samfunnsbedriftene enterprises still have a lot in common with what we find in the traditional public sector. We may also assume that a large proportion of the workforce have previously been municipal employees. Comparable industries and employees in the private sector have a lower unionisation rate, which shows that the current high union density should not be taken for granted. It means that the unionisation rate in Samfunnsbedriftene enterprises could fall in the years to come, for example if the staff turnover rate increases, if newly recruited staff no longer see the advantages of union membership or if employer-trade union cooperation is not prioritised. 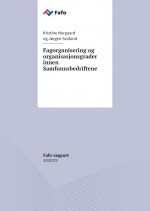