Services provided by the NLWA in prisons

This report presents the results of a process evaluation of how the rights of prison inmates to services provided by the Norwegian Labour and Welfare Administration (NLWA) are taken care of. The general research question of the process evaluation was:

To what extent and in what way are prison inmates’ rights to services provided by the NLWA
taken care of?

The evaluation is based on the collaboration agreement signed by the Norwegian Correctional Service and the Norwegian Labour and Welfare Administration in October 2014. The precise objective of this agreement was to reinforce the collaboration and improve the access to NLWA services for prison inmates. To follow up this agreement, guidelines for NLWA advisors in prisons have been prepared, and the correctional system has established guidelines for collaboration with the NLWA in prisons. We have examined in detail how these central guidelines are complied with locally, and their potential impact regarding the inmates’ access to services, collaboration and the distribution of tasks and responsibilities between the various agencies involved in rehabilitation work in prisons.

The research project ‘NLWA in prisons’ was launched in the autumn of 2015 and ran for two years until October 2017. The project is designed as an evaluation with a process-oriented approach. Eight case prisons were selected for the evaluation, representing a range of prison types. NLWA advisors and staff associated with these prisons were invited to participate in sessions arranged by the NLWA and the Directorate of Correctional Services over the course of the project period, and most of our data were collected during these sessions. Two of the prisons were specifically monitored, with separate case visits on two occasions. In addition, an online survey of all prisons and NLWA advisors was conducted. The first part of the survey focused on NLWA resources in prisons. The main part of the survey was only given to respondents who reported that the NLWA maintained regular office hours in their prison. The project had only limited funds available for data collection, and all findings and analyses must be considered with this in mind. Prison inmates have not been included as participants in the study, making impossible any assessment of the inmates’ access to NLWA services from the point of view of those directly concerned.

In the report, we show that the NLWA has gradually established a presence in many prisons around the country, but with very variable personnel resources on site. In the eight case prisons in this study, NLWA’s total presence declined over the evaluation period; the number of man-years fell from eight in 2015 to five in 2017. The three man-years that disappeared were funded by temporary government grants to the local NLWA office in the municipality where the prison was located. Today, three of our eight case prisons have no NLWA presence with fixed office hours on site.

The process evaluation shows that the NLWA has established a key role in those prisons where they have a presence. Although there are local variations between the prisons in terms of how the NLWA works and prioritises, work-related assistance, allowances for the transition to employment and activity, and clear income security after release appear to be the main areas for the NLWA advisors. This study shows that without an NLWA presence in the prisons, the inmates lose their access to services, in particular with regard to employment-related assistance. The correctional services take by far the greatest responsibility for social work and services related to the Social Services Act in NLWA. . The evaluation shows that the presence of an NLWA advisor on site enhances the quality of the rehabilitation efforts in the prison as well as their resource-effectiveness. When present on site, the NLWA can provide certain services that the prison would otherwise be unable to make available. Several examples show how the NLWA advisors undertake employability assessments and actively help identify needs for assistance and establish access to various NLWA services prior to release, in collaboration with the local NLWA office. The on-site NLWA advisors perform a number of tasks that ease the burden on the local NLWA offices. They also help simplify the contact with the local NLWA offices, including access to the NLWA’s administrative systems. The NLWA presence in prisons is a service that has the potential to reinforce the efforts to increase the rehabilitation rates of inmates in their transition to employment and activity.

The evaluation shows clearly that the way in which the rehabilitation efforts are organised in prisons depends on their local context. The type of prison in question, the length of prison terms, the number of releases, options and services available in the prison and the correctional services and resources in terms of social work all have an impact. Local operationalisations and agreements on the distribution of work and responsibilities between the NLWA and the correctional services in each prison are therefore essential. Moreover, the evaluation shows that there is widespread endorsement of the central guidelines’ emphasis that the NLWA presence in prisons should give priority to employment-related measures and the state services in the NLWA, benefits and pensions. Two years after the signature of the collaboration agreement, a large proportion of the NLWA advisors and prison respondents report that the guidelines are considerably helpful in establishing a clearer distribution of responsibilities in the prisons.

The process evaluation elucidates how the NLWA may act as an intermediary in prisons. Numerous examples show that familiarity with the system, skills, networks and access to the NLWA’s administrative systems provide better opportunities for establishing contact with the NLWA on the outside. Having a perspective from within as well as from outside the prison is a key factor for the role that the NLWA can play in rehabilitation and as an intermediary between the period of incarceration and life after release, as well as an instrument for better continuity in the follow-up. 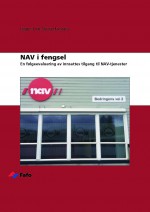