The ABE reform in the performing arts: Cuts without artistic consequences?

Each year, central, regional and local government authorities channel funding into the culture sector, including for purposes of supporting democracy, freedom of speech, community and diversity (NOU 2013: 4). These public grants are intended to help enhance quality and achieve a diversity of expression, which can be created by cultural activities that have artistic freedom and are independent of political authorities. The culture sector is in agreement on the principle of keeping an arm’s length distance between the funding authority and the cultural institutions that receive grants (Mangset 2012). Political authorities should not interfere in artistic and cultural choices made by the institutions. In some cases, cultural policy is justified with reference to how art and culture are public goods and in light of the goal of ensuring the greatest possible equality of access to cultural events. In this perspective, the role of policy is to ensure that the entire population, irrespective of gender, ethnicity or socioeconomic status, can enjoy art and culture of high quality and participate in cultural life (NOU 2013: 4: 87). The Enger Commission points out that tensions will occasionally arise between this free and democratic art on the one hand and political demands on the other, ‘irrespective of whether these [demands] concern the need to reach out to different audiences or to fulfil criteria for artistic quality.
The reform to cut bureaucracy and enhance public sector efficiency (the ABE reform) was introduced by the Solberg government from the 2015 budget year. The reform was intended to persuade government agencies to enhance their efficiency and entails an annual 0.5 per cent cutback in operational budgets. Some years, the Storting has increased the cutbacks. The reform has been criticised. It involves an automatic shaving of budgets, irrespective of whether the enterprises concerned are labour-intensive, and of their potential for rationalisation, digitalisation and simplification. Such differences exist, however, and the reform may thus have a varying impact on different areas and enterprises.

General research questions in the report:

The COVID-19 pandemic has had major consequences for the culture sector and those working in it. In the report, we wished to capture the consequences of the ABE reform and the cuts it has entailed, as well as the consequences in a normal situation. We, therefore, concentrate on the period from the introduction of the reform until 31 December 2019. In the period after this date, the lockdowns related to infection control and the support schemes launched in that context have impacted the situation in ways that complicate analyses of the effects of the ABE reform as such.
The study includes leaders and trade union representatives in enterprises that are members of the Association of Norwegian Theatres and Orchestras (NTO), but restricted to those enterprises that are subject to the automatic government cutbacks. We concentrate on enterprises that receive operational subsidies or grants from the central government. NTO is an industry association for professional performing arts and organises 51 member enterprises: orchestras, theatres, opera houses and other enterprises that receive public funding. A number of employee organisations exist. The artists’ association Creo has members who work in artistic or art education professions. Other unions that organise members in NTO enterprises include the Norwegian Civil Service Union (NTL), Fagforbundet for teater og scenekunst (FTS), The Norwegian Actors' Equity Association and Norske Dansekunstnere (NoDa). This study includes a survey among leaders of NTO member enterprises and representatives of various trade unions in the same enterprises. In addition, case interviews were conducted in twelve enterprises.

What does the report show?

In Chapter 2 we examine the first research question. We find that the grant recipients do not fall under the Ministry of Finance’s definition of enterprises that would normally be encompassed by the ABE reform. The definition states that the ABE cuts should apply to the enterprises’ operational budgets. However, the grant recipients do not receive any funding over the operational budget; they receive government subsidies. Based on the review, it appears that the Ministry of Culture has chosen to expose the grant recipients to the same cutbacks as those that have applied to the central government ever since the introduction of the reform in 2015, even though they are not formally encompassed by the reform. For the grant recipients, the effects will be the same irrespective of whether they are formally exposed to a ‘rationalisation cutback’, rather than a ‘de-bureaucratisation and rationalisation cutback’, with the exception of the fact that these cutbacks have amounted to 0.5 per cent in each year since the reform. For enterprises that are encompassed by the ABE reform, in this context the National Touring Theatre, the cutbacks have exceeded 0.5 per cent in some of the years. Based on different proposals for the national budget and in light of the responses from various ministers of culture during question time in the Storting, the sums that are saved by these cutbacks among the grant recipients are redistributed to other prioritised areas in the Ministry of Culture’s budget.

In Chapter 2, we also examine the second research question, regarding whether concerns for the independence of the grant recipients (the arm’s length principle) have been discussed or assessed in light of the ABE reform. We find cannot find any discussion of this principle or of the question of whether the ABE reform could potentially conflict with this principle in any official documents, nor in any debates where the central government has been involved. If cutbacks in the general grants are compensated for by increased funding that comes with political strings attached, this means that the artistic expressions and activities of the enterprises will be politically governed to a greater extent. It may appear that there has been a certain increase in the amount of politically guided funding for various initiatives in recent years.

The way in which the ABE reform impacts the financial position of the enterprises is a key issue. Some of the grant recipients in the report receive their entire public funding from the central government, while others receive 70 per cent from the central government and the rest from local and county authorities. It is conceivable that the government cutbacks will be followed by equivalent cutbacks by the local and county authorities, but it is also possible that the local/county authorities could increase their grants, which thus will dampen the effect of the reform on the financial position of the enterprises. The interviews (Chapter 3) and the survey (Chapter 4) show that it is unimportant for the economy of the enterprises whether they receive grants exclusively from the central government or from both the central government and the region or county. Most of the respondents report that the cutbacks in funding from the central government have led to equivalent cutbacks by the region or county. Given that the enterprises are subject to such cutbacks, a key issue is whether they are able to increase their self-generated income (ticket sales, income from renting out premises or sponsorships). In the interviews, we found that the enterprises constantly seek to increase their income through sponsorships or in other ways. We found that some of the enterprises, especially the theatres, had increased their income by succeeding in increasing average attendance at their performances. One way to do this is to stage performances that appeal to a wider audience. It was pointed out, however, that this strategy can only be taken so far without coming into conflict with the societal remit of staging varied performances from a wide range of genres. Furthermore, it emerged that many enterprises have increased their incomes by raising ticket prices, some by far more than the retail price index. This may also conflict with the goal of giving access to a varied cultural programme for all segments of the population. Although self-generated income is important to many enterprises, Chapter 4 shows that this is far from the most important source. Few leaders or trade union representatives report that their enterprises have any significant income from private sponsors.

Furthermore, we find that three of every four leaders or trade union representatives report that their enterprise has needed to make budget cuts. Twelve per cent report that other incomes have compensated for the cutbacks. This is in line with the effects of the cutbacks in other parts of the central government; 22 out of 58 leaders and trade union representatives report that their government funding has been reduced, while 14 answer that it has remained virtually unchanged. It is conceivable that cutbacks in central government funding can be compensated for by increases in other revenues or grants, such as various forms of public project funds. However, approximately the same number of respondents report that their budgets have been reduced as those reporting that the government grants have been cut.

The final research question concerns the consequences or effects of the ABE reform. How do leaders and trade union representatives in performing arts enterprises experience these effects? This question is examined in Chapter 6. We find that six of every ten leaders or trade union representatives perceive the (ABE) cutbacks as substantial or very substantial, while nearly four in every ten reports that the cutbacks have had a large or very large impact on the operation of their enterprise. The cutbacks are strongly felt, so what has been done to manage them?

Many leaders and trade union representatives report that the cutbacks have been evenly distributed over the departments and units in the enterprise. Many reports that retiring staff members have not been replaced. The cutbacks have also affected their use of freelancers and temporary personnel. Some enterprises make more use of their own staff, while others terminate these and use more external hiring. Some respondents report that the cutbacks have led to rationalisation efforts. The survey shows that very few respondents regard the cutbacks as a good method to rationalise their enterprise, which is not very surprising since many feel that the reform has had a negative or very negative effect on their enterprise’s efficiency. In the interviews, it also emerged that many leaders saw this ‘rationalisation reform’ as a paradox. Some of the informants saw the reform as a form of punishment since their enterprise had already taken steps to rationalise before the reform. Many of these enterprises thus had to make cuts that more closely affected the artistic activity. Enterprises that had not rationalised to the same extent could therefore avoid making such substantial cuts in their activities. According to our informants, the burden of reporting to the Ministry of Culture and the Fund for Culture had also increased during the same period.

Furthermore, the report shows that the cutbacks have entailed a number of changes related to the artistic programme; performance and concert formats have been changed and projects terminated or shelved. Some report to have reduced their number of new initiatives. More than one in every four reports that their enterprise now has fewer venues when touring, and some enterprises have reduced their international activity. In the survey, four in every ten respondents report that the level of artistic activity has been somewhat reduced, while 22 per cent report that the activities have been expanded. In addition to these quantitative cutbacks, 33 out of 58 respondents report that the ABE reform has influenced their scope of artistic expression. Moreover, leaders and trade union representatives feel that the quality has suffered: 42 out of 58 respondents report that the reform has negatively impacted the quality of their artistic activity, while 28 out of 57 believe that it has entailed negative consequences for their communications work. Finally, we find some who feel that their artistic programme has become more market-oriented, but the majority of the respondents report that their programme has remained more or less unchanged. 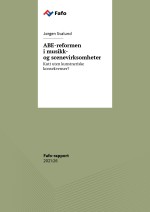