In this report, we examine various factors related to working hours in the organisational area of the Norwegian Union of Social Educators and Social Workers (FO). More specifically, we look at members’ working time arrangements and the challenges they might face with such arrangements. The report also explores experiences with working from home, and shop stewards’ influence on working time arrangements in the individual enterprises. This report is based on a survey of FO’s shop stewards and group interviews with shop stewards from various enterprises with a collective agreement.

In response to a question about how the working time arrangement came about, more than half of the shop stewards report that shift arrangements are made at a local level, while around one-fifth state that they have only been discussed. One rostering practice that seems to be widespread consists of yearly plans agreed between the enterprise/unit and the head shop steward, and these dictate the overarching framework. This is followed by local adaptations and discussions in which the shop stewards are involved.

Many of the shop stewards point out that the benefits of two-shift and three-shift patterns include higher earnings and often the prospect of a full-time or near full-time position. The shop stewards consider these shift patterns to be disadvantageous in terms of workload, health, social life and leisure time, or life situation and family life.

The preponderance of FO shop stewards believe that two-shift and three-shift patterns have a major or moderately positive effect on the quality of services, professional standards, and the patients, clients or users of the services’ opportunities for involvement. Slightly fewer (but still almost half) thought that these patterns could also have a positive effect on the opportunities to involve patients’ families. The number who thought that these shift patterns were negative in relation to the scope of violence and threats was about the same as for those who thought they were positive, while almost half (47%) thought that the arrangement has no effect either way.

When asked about the advantages and disadvantages of long shifts, a majority of the shop stewards indicated a positive effect on personal finances. Many also believe that long shifts make it easier to secure full-time or near full-time positions. However, their opinion was more split on the effect of long shifts on workers’ families and social lives, workloads and health.

The deviation from standard daytime working hours is mainly driven by user needs. In this chapter, we also see that the shop stewards report that long shifts are generally positive for user involvement and the quality of services. The group interviews are more nuanced on this topic. The needs of users differ, and long shifts can be a strain on staff as well as users when they are in close contact over long periods. Some of the shop stewards were also concerned that working long shifts over time can have a negative impact on workers’ health, without them necessarily realising this.

In Chapter 5, we take a closer look at working time issues for members who work daytime hours, as well as flexitime and working from home. Most (78%) of FO’s shop stewards report that the members who work daytime hours have flexitime. This arrangement is generally considered to be positive, with 87% saying that they are very or fairly satisfied with their flexitime arrangement.

Two out of three shop stewards indicated that employers asked everyone who was in a position to do so to work from home during the COVID-19 pandemic. The number of hours worked at home varies, but 36% say that it was more than half the total working hours. The situation has changed since the measures were discontinued, and at the time of the survey, 77% of the shop stewards said that their members spent less than 25% of their hours working from home. Agreements on working from home were not commonplace. Only 11% say that all or some of their members had such agreements.

Chapter 6 discusses shop stewards’ involvement and co-determination with regard to working hours.

In general, it appears that the shop stewards are closely involved in the drawing up of new shifts. This is probably also related to the fact that most shifts will require an agreement with the shop steward, meaning that the employer will have to involve them in order to set the rosters.

Shift planning and changes in particular seem to be the subject of much discussion. One area that has not been discussed at any great length with the shop stewards is working from home. This is assumed to be because the change was introduced so quickly, and that it was imposed by the government.

In the survey, the shop stewards were asked about the processes for improving shift planning. Most indicated that it would be beneficial if they had more time to undertake evaluations, and the second most popular alternative was more time to prepare for discussions and negotiations. About half thought that more training in digital tools was important and that employers should give their input more consideration.

Finally, in Chapter 7, we examined which working hours issues the shop stewards want to be prioritised in the future. The right to full-time work was at the top of the list and this was followed by a higher shift allowance. The former was of particular interest to the shop stewards from the municipal sector.

Some believe there is a need to improve shop stewards’ competence in drawing up shifts, and some also want to see a tightening of the regulations on what can be agreed. The latter was particularly related to the short rest periods between working days and the distribution of fixed and flexible hours in the shift roster.

The shop stewards disagreed about how well 24-hour shifts and long shifts work. One view that emerged was that, in terms of number of hours, rest periods and compensation, major disparities were not desirable between the different industry-level collective agreements.

Full pay for all attendance was an area that most wanted to prioritise. This was linked to various issues, such as the relationship between flexitime and overtime, the inclusion of travel time in hours worked, and lunch breaks etc. 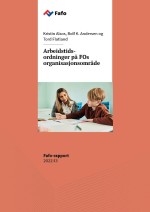